Within the Lonesome Heart of America: Greg Brown 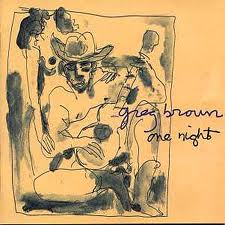 14 Jan Within the Lonesome Heart of America: Greg Brown

There are at least two kinds of souls on the path of authenticity. First, there are those that traipse up the mountain path and shed coat after coat and layer after layer of masks and shields. This feat is accomplished more by the world’s scars and wounds than by any choice. These are worthy of praise for their courage to strip themselves of everything that is not essentially “true.”

Then there are those very few who come in and will go out “real.” They spend their entire lives easily fending off all that doesn’t fit or ring “true” for them as naturally as most wake up, go about their day, and go to sleep. They are often keen observers of the world and its strange mixture of beauty and brutality, light and shadow, defeat and victory.

I believe that Greg Brown is one of these few. How do I know? Well, I don’t really know for sure. He’s not a friend, nor have I followed his personal life to any degree, and I’m sure it has its ups and downs, twists and turns as most anyone’s.

But I can tell you that many years ago—long before Greg Brown began to receive what was due him regarding his career—I saw him give a performance in a small, insignificant venue in Atlanta. It was the same Greg Brown that exists today by all indication. By same, I mean—way back when— Brown possessed that sharply observant wit that is unmistakeably “American,” a heart and shine direct and genuine like the sun. A hundred—and then some— songs later that recognizable wily walk and talk hasn’t changed a bit. His character is still as hard as a rock and soft as a stream.

Gregory Dane Brown (born July 2, 1949) is a folk musician from the Hacklebarney region of southeast Iowa.

Brown’s first professional singing job came at age 18, running hootenannies (folksinger get-togethers) at the legendary Gerde’s Folk City in New York City. A year later, Brown moved west to Portland and then Los Angeles and Las Vegas, where he was a ghostwriter for Buck Ram, founder of The Platters. Brown then traveled with a band for a few years, and then quit playing for a while before he moved back to Iowa and began writing songs and playing in clubs and coffeehouses.

During the 1980s, his reputation was established through frequent touring and recurring performances on A Prairie Home Companion. Subsequently, his work has been nominated for Grammy awards. He also founded his own record label, named Red House Records after a home in which he lived in Iowa. To date, over 200 recordings have been released on Red House by artists such as Pat Donohue, Ramblin’ Jack Elliott, Eliza Gilkyson, John Gorka, Lucy Kaplansky, John McCutcheon and many more.

He has recorded more than two dozen albums, including his 1986 release, Songs of Innocence and of Experience, when he put aside his own lyric writing to set poems of William Blake to music. One Big Town, recorded in 1989, earned Brown three and a half stars in Rolling Stone, chart-topping status in AAA and The Gavin Report’s Americana rankings and Brown’s first Indie Award from NAIRD (National Association of Independent Record Distributors).

The Poet Game, his 1994 CD, received another Indie award from NAIRD. His critically acclaimed 1996 release, Further In, was a finalist for the same award. Rolling Stone’s 4-star review of Further In called Brown “a wickedly sharp observer of the human condition.” 1997’s Slant 6 Mind earned Brown his second Grammy nomination. In 1999, Red House re-released One Night, a 1983 live performance originally on Minneapolis’ Coffeehouse Extemporé Records.

Known for his personal and intimate concerts, Brown’s most revealing recordings are live. In addition to One Night and several of his benefit CDs, 1995’s The Live One (recorded in Traverse City, Michigan), 2003’s Live at the Black Sheep, In the Hills of California: Live from the Kate Wolf Music Festival 1997–2003 (released in 2004), and 2007’s Live from the Big Top, recorded at the Big Top Chautauqua in Bayfield, Wisconsin bring a glimpse of the power of Brown’s live shows. In 2007, he was nominated for a Folk Alliance Award in the category of Contemporary Artist of the Year.

Brown’s songwriting has been lauded by many, and his songs have been performed by Willie Nelson, Jack Johnson, Carlos Santana, Michael Johnson, Ani DiFranco, Shawn Colvin, Mary Chapin Carpenter, Iris DeMent and Joan Baez, who covered his songs “Sleeper” and “Rexroth’s Daughter” on Dark Chords on a Big Guitar.

Brown’s mother played electric guitar, his grandfather played banjo, and his father was an electrician who became a Pentecostal minister in Earlville, Iowa, and later converted to the Baha’i Faith.

Greg was first married to Sarah Ann Taft, and they had three children: Constance, Zoe, and Pieta, who are also musicians. Pieta Brown, has released several albums of her own and tours actively as of 2007.

On November 21, 2002 he married the singer-songwriter Iris DeMent. In 2005, Brown and DeMent adopted another daughter from Russia.

Now you stand at the station and you look at the sky
And the train rolled in and it went on by
You had packed up your suitcase, you had saved up the fare
And you don’t know why, but you’re still standing there

Well, your children look at you and wonder
‘Bout this woman made up of lightning bugs and thunder
And they take in what you can’t help but show
With your name that is half yes, half no