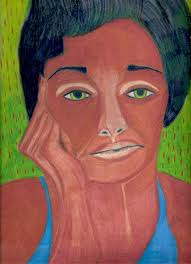 For the longest time, I have had a question or two inside the cave of my heart that I’ve wanted to ask you? So let me cut to the chase. I know you would appreciate that. Was your suicide an act of despair or empowerment? The way of your death comes as a zen koan for me. The time period in which you lived would have made it nigh impossible for you to transition —from that gap within the crevice of time —to the stifling, conventional world.

You were already in your twenties in the 1950’s. I don’t know whether it was your bi-polar disorder or just the horrible lonesomeness you must have felt to be a woman who “saw” things, behind the curtain, beyond the veil of the crudest of illusions, that encouraged you to take your own life.

I don’t know whether you would be shamed or celebrated in today’s world where diva pop stars get invited to sing for presidents and dictators, women are scientists, astronauts, academic deans, literati, celebrated poets, and even run for president. Marilyn sang for a president, too. She had a similar fate as you, Ms. Sexton. Did the two of you become friends in the bardos, mix it up, chat it up, search for another opportunity to enter this ridiculous matrix, this agonizing crucible once again?

Have you reincarnated— out of some divine stay of eternal execution— and now, in today’s different world,  kick ass somewhere? Hope you’re not Lady Gaga. If the reincarnated soul progresses in its next lifetime, this would surely be impossible. But if the soul becomes its own opposite and caricature of itself, maybe Lady Gaga is you. Horrible thought.

All I know is —like that priest who told you that “God is in your typewriter”—my bet is that you might very well today be a priestess somewhere, but not in any mainstream sort of way. Yes, Ms. Sexton, woman are actually ordained now in the episcopal church. You would leave such a post if you were here. Not authentic enough. Plays right into the hand of the institution.

Ms. Sexton, I have a confession to make to you. A while back I had a vision that I had put on vestments and had lifted your naked, dead body to the morning sun, asking God to forgive you for your big sin.  But more recently, I woke up from a dream: You were standing naked and had lifted my dead body dressed in vestments to the moon asking God to forgive my self-righteousness. Geez, I sure do hope He (or She or It) heard you.

Wikipedia: Anne Sexton ( 1928 -1974, ) was an American poet, known for her highly personal, confessional verse. She won the Pulitzer Prize for poetry in 1967. Themes of her poetry include her suicidal tendencies, long battle against depression and various intimate details from her private life, including her relationships with her husband and children.

On October 4, 1974, Sexton had lunch with poet Maxine Kumin to revise galleys for Sexton’s manuscript of The Awful Rowing Toward God, scheduled for publication in March 1975 (Middlebrook 396). On returning home she put on her mother’s old fur coat, removed all her rings, poured herself a glass of vodka, locked herself in her garage, and started the engine of her car, committing suicide by carbon monoxide poisoning.

In an interview over a year before her death, she explained she had written the first drafts of The Awful Rowing Toward God in twenty days with “two days out for despair and three days out in a mental hospital.” She went on to say that she would not allow the poems to be published before her death. She is buried at Forest Hills Cemetery & Crematory in Jamaica Plain, Boston, Massachusetts. Dave Matthews Band’s song Grey Street, from the album Busted Stuff, is written about Sexton.

The Awful Rowing Toward God. The title came from her meeting with a Roman Catholic priest who, although unwilling to administer last rites, told her “God is in your typewriter.” This gave the poet the desire and willpower to continue living and writing. The Awful Rowing Toward God and The Death Notebooks are among her final works, and both center on the theme of dying.

Excerpts from a Variety of Anne Sexton’s works:

“Watch out for intellect, because it knows so much it knows nothing and leaves you hanging upside down, mouthing knowledge as your heart falls out of your mouth.”

“Put your ear down close to your soul and listen hard.”

“All I wanted was a little piece of life, to be married, to have children…. I was trying my damnedest to lead a conventional life, for that was how I was brought up, and it was what my husband wanted of me. But one can’t build little white picket fences to keep the nightmares out.”

“I am alone here in my own mind.
There is no map
and there is no road.
It is one of a kind
just as yours is.”

“Love? Be it man. Be it woman.
It must be a wave you want to glide in on,
give your body to it, give your laugh to it,
give, when the gravelly sand takes you,
your tears to the land. To love another is something
like prayer and can’t be planned, you just fall
into its arms because your belief undoes your disbelief.”
―  The Complete Poems

“Saints have no moderation, nor do poets, just exuberance.”

“Only my books anoint me,
and a few friends,
those who reach into my veins.”

“Depression is boring, I think,
and I would do better to make
some soup and light up the cave.”

“Once I was beautiful. Now I am myself,
counting this row and that row of moccasins,
waiting on the silent shelf.”

“I have gone out, a possessed witch,
haunting the black air, braver at night;
dreaming evil, I have done my hitch
over the plain houses, light by light:
lonely thing, twelve-fingered, out of mind.
A woman like that is not a woman, quite.
I have been her kind.

I have found the warm caves in the woods,
filled them with skillets, carvings, shelves,
closets, silks, innumerable goods;
fixed the suppers for the worms and the elves:
whining, rearranging the disaligned.
A woman like that is misunderstood.
I have been her kind.

I have ridden in your cart, driver,
waved my nude arms at villages going by,
learning the last bright routes, survivor
where your flames still bite my thigh
and my ribs crack where your wheels wind.
A woman like that is not ashamed to die.
I have been her kind.”
―  To Bedlam and Part Way Back

“O starry night, This is how I want to die.”
The Complete Poems

“God owns heaven but He craves the earth.”

“Yet love enters my blood like an I.V.,
dripping in its little white moments.”

“Take your foot out of the graveyard,
they are busy being dead.”
The Complete Poems

“She is so naked and singular.
She is the sum of yourself and your dream.
Climb her like a monument, step after step.
She is solid.”

“Poetry is my life, my postmark, my hands, my kitchen, my face.”

“And what of the dead? They lie without shoes
in the stone boats. They are more like stone
than the sea would be if it stopped. They refuse
to be blessed, throat, eye and knucklebone. ”