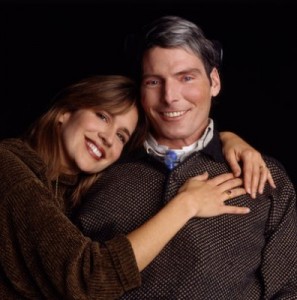 “I feel good when I do good. I feel bad when I do bad. This is my religion,” said Christopher Reeve, quoting Abraham Lincoln in a television interview after his life-transforming accident.

When I first heard of Reeve’s spinal cord injury in a horse competition in 1995, and the positive attitude and devotion to karma yoga (serving others as a focused path of purpose) he exemplified in the years following, I remember saying to myself, “Geez, he is superman.”  One of my nurse clients, an advocate for spinal injury patients, had visited Reeve in an intimate setting. She recalled, “light inundated the entire room when he was present.”

It was uncanny to hear of Dana’s death from lung cancer only two years after her husband’s. She never smoked cigarettes. Although there would be children who would deeply grieve the loss of their parents, hearing of this felt “right” to me. There was this genuine love that couldn’t be “faked” when you saw the two of them together. There was an obvious spiritual bond that transcended any physical or even emotional tie between them. Christopher and Dana Reeve were obviously old soulmates who had come into the world for a series of purposes that included a steep path of opposites, from worldly success and fame to an inner, golden enlightenment of sorts, won by the embrace of the path of sublimated suffering.

Look at your partner or soulmate and see in their eyes whether or not they would have the compassion and love necessary for such a path. Look in the mirror to see if you have that love for them. If one does not or neither of you do, it is unlikely that you will be with each other for the duration of this  lifetime when things around you or within you start falling part. Or if you are, one of you will endure it alone or perhaps with someone else who has enough compassionate light in their eyes. That’s if you are lucky or grace befalls you.

Christopher D’Olier Reeve ( 1952 – 2004) was an American actor, film director, producer, screenwriter, author and activist. He achieved stardom for his acting achievements, including his notable motion picture portrayal of the fictional superhero Superman.

Dana Reeve (née Morosini) (1961 – 2006) was an American actress, singer, and activist for disability causes. She was the widow of actor Christopher Reeve.

On May 27, 1995, Reeve became a quadriplegic after being thrown from a horse in an equestrian competition in Virginia. He required a wheelchair and breathing apparatus for the rest of his life. He lobbied on behalf of people with spinal cord injuries, and for human embryonic stem cell research afterward. He founded the Christopher Reeve Foundation and co-founded the Reeve-Irvine Research Center.

Reeve married Dana Morosini in April 1992, and they had a son, William, born that June. Reeve had two children, Matthew (born 1979) and Alexandra (born 1983), from his previous relationship with his longtime girlfriend, Gae Exton.

In 1973, around two thousand students auditioned for twenty places in the freshman class at Juilliard. Reeve’s audition was in front of ten faculty members, including John Houseman, who had just won an Academy Award for The Paper Chase. Reeve and Robin Williams were the only students selected for Juilliard’s Advanced Program. They had several classes together in which they were the only students. In their dialects class with Edith Skinner, Williams had no trouble mastering all dialects naturally, whereas Reeve was more meticulous about it. Williams and Reeve developed a close friendship.

Almost 10 years after Somewhere in Time was released it became a cult film, thanks to screenings on cable networks and video rentals; its popularity began to grow, vindicating the belief of the creative team. INSITE, the International Network of Somewhere in Time Enthusiasts, did fundraising to sponsor a star on the Hollywood Walk of Fame in 1997 for Reeve. Jane Seymour became a personal friend of Reeve and in 1996 named her twin son Christopher in his honor.

Reeve stretched his acting range further and played a novice playwright opposite Michael Caine in Sydney Lumet’s film Deathtrap. The film was well received. Reeve was then offered the role of Basil Ransom in The Bostonians alongside Vanessa Redgrave. Though Reeve ordinarily commanded over one million dollars per film, the producers could only afford to pay him one-tenth of that. Reeve had no complaints, as he was happy to be doing a role that he could be proud of. The film exceeded expectations and did very well at the box office for what was considered to be an art house film. The New York Times called it “the best adaptation of a literary work yet made for the screen.” Katharine Hepburn called Reeve to tell him that he was “absolutely marvelous” and “captivating” in the film.

In October of 1992 Reeve was offered the part of Lewis in The Remains of the Day. The script was one of the best he had read, and he unhesitatingly took the part. The film was deemed an instant classic and was nominated for eight Academy Awards.

Reeve took up horse riding in 1985 after learning to ride for the film Anna Karenina. He was initially allergic to horses, so he took antihistamines. He trained on Martha’s Vineyard, and by 1989 he began eventing. As with every other sport and activity in which he participated (sailing, scuba diving, skiing, aviation, windsurfing, cycling, gliding, parasailing, mountain climbing, baseball, tennis), he took horse riding seriously and was intensely competitive with it. His allergies soon disappeared.

Reeve bought a 12-year-old American thoroughbred horse named Eastern Express, nicknamed “Buck”, while filming Village of the Damned. He trained with Buck in 1994, and planned to do Training Level events in 1995 and move up to Preliminary in 1996. Though Reeve had originally signed up to compete at an event in Vermont, his coach invited him to go to the Commonwealth Dressage and Combined Training Association finals at the Commonwealth Park equestrian center in Culpeper, Virginia. Reeve finished at fourth place out of 27 in the dressage, before walking his cross-country course. He was concerned about jumps sixteen and seventeen, but paid little attention to the third jump, which was a routine three-foot-three fence shaped like the letter ‘W’.

On May 27, 1995, Reeve’s horse had a refusal. Reeve fell and sustained a cervical spinal injury that paralyzed him from the neck down. He had no recollection of the incident. Witnesses said that Buck started the jump over the third fence, and then suddenly stopped. Someone said that a rabbit spooked the horse, and another person claimed that it might have been a shadow. Reeve held on and the bridle, the bit, and the reins were pulled off the horse and tied his hands together. He landed headfirst on the other side of the fence. His helmet prevented any brain damage, but the impact of his 215 pound (98 kg) body hitting the ground shattered his first and second vertebrae. Reeve had not been breathing for three minutes before paramedics arrived. He was taken to the local hospital, and then flown by helicopter to the University of Virginia Medical Center.

After considering his situation, believing that not only would he never walk again, but that he might never move a body part again, Reeve considered suicide. He mouthed to Dana, “maybe we should let me go.” She tearfully replied, “I am only going to say this once: I will support whatever you want to do, because this is your life, and your decision. But I want you to know that I’ll be with you for the long haul, no matter what. You’re still you. And I love you.” Reeve never considered suicide as an option again.

Reeve went through inner anguish in the ICU, particularly when he was alone during the night. His approaching operation to reattach his skull to his spine (June 1995) “was frightening to contemplate. … I already knew that I had only a fifty-fifty chance of surviving the surgery. … Then, at an especially bleak moment, the door flew open and in hurried a squat fellow with a blue scrub hat and a yellow surgical gown and glasses, speaking in a Russian accent.” The man announced that he was a proctologist and was going to perform a rectal exam on Reeve. It was Robin Williams, reprising his character from the film Nine Months. Reeve wrote: “For the first time since the accident, I laughed. My old friend had helped me know that somehow I was going to be okay.”

On June 28, 1995, Reeve was taken to the Kessler Rehabilitation Center in West Orange, New Jersey. He was given several blood transfusions in the first few weeks due to very low hemoglobin and protein levels. Many times his breathing tube would disconnect and he would be at the mercy of nurses to come in and save his life.

At the Institute, one of his aides was a Jamaican man named Glenn Miller, nicknamed Juice, who helped him learn how to get into the shower and how to use a powered wheelchair, which was activated by blowing air through a straw. The most difficult part of rehabilitation was respiratory therapy. The therapist, Bill Carroll, used a hose to see how much air Reeve could inhale, measured in cubic centimeters as the vital capacity. Bill Carroll said, “I’ve never seen progress like that. You’re going to win. You’re going to get off this thing.” On December 13, 1995, Reeve was able to breathe without a ventilator for 30 minutes.

In early October 2004, he was being treated for a pressure wound that was causing a sepsis, a complication that he had experienced many times before. On October 9, Reeve felt well and attended his son Will’s hockey game. That night, he went into cardiac arrest after receiving an antibiotic for the infection. He fell into a coma and was taken to Northern Westchester Hospital in Mount Kisco, New York. Eighteen hours later, on October 10, 2004, Reeve died of cardiac arrest at the age of 52. His doctor, John McDonald, believed that it was an adverse reaction to the antibiotic that caused his death.

Dana Reeve authored the book, Care Packages: Letters to Christopher Reeve from Strangers and Other Friends. In 2004, she was performing in the Broadway-bound play Brooklyn Boy at South Coast Repertory in Costa Mesa, California when she had to rush home to reach her husband’s bedside after he went into cardiac arrest and a coma.

In August 9, 2005 Reeve announced that, although she had never smoked cigarettes, she had been diagnosed with lung cancer. Reeve chose to disclose her illness after The National Enquirer announced that it planned to make the information public.

In 2005, Reeve received the “Mother of the Year Award” from the American Cancer Society for her dedication and determination in raising her son after the loss of her husband. In her final public appearances, Reeve stated that the tumor had responded to therapy and was shrinking. She appeared at Madison Square Garden on January 12, 2006, and sang the Carole King song “Now and Forever” in honor of New York Rangers hockey player Mark Messier, whose number was retired that evening. On the night that she died, instead of having a live performer sing the national anthem at Madison Square Garden prior to the Rangers’ game, a recording of Reeve singing was played.

Dana Reeve died on March 6, 2006, at the age of 44, at Memorial Sloan–Kettering Cancer Center in New York City.