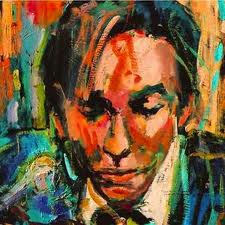 One scent, one taste, one touch, one glimpse of the divine in the human experience,  or the human in the divine experience will catapult the soul to heaven and send the ego to hell. What other perfume, what other nectar, what other sheath, what other vision is worth the price of one or a thousand lifetimes here on earth? Love is the infant’s milk, the lover’s honey, and the sage’s wine.

Love has many stages and forms, entrances and exits, stops and starts, hesitations and flows, deserts and oceans. Love promises and betrays, seeks and hides, writhes in the embrace of ecstasy and shudders in the grip of death. Love is grief-filled abandonment and joyful reunion. It is longing and fulfillment ,captivity and release. And every movement toward or away from love is love’s own doing and undoing.

From love the heart cannot escape, although love can escape the heart. Every soul’s beginning and end sides with love, it’s very origin and goal, it’s alpha and omega. Love is a golden, cushioned imprisonment for the ego and a wounded, winged freedom for the soul that understands the infinite compassion of that annihilation that can only come from Love’s divine sword of Light.

The lyrics of Antonio Carlos Jobim—who was often called “Tom”— speak of love, self discovery, betrayal, sadness and joy. Jobim (1927- 1994), was a Brazilian composer, arranger, singer, pianist and perhaps the greatest legend of bossa nova. Jobim’s compositions, many performed by João Gilberto, gave birth to the genre in the early 1960s.

Jobims roots were planted firmly in the works of Pixinguinha, a legendary musician and composer who, in the 1930s, began the development of modern Brazilian music. He was also influenced by the music of French composer Claude Debussy and by jazz.

Jobim found prominence when he teamed up with writer and poet Vinicius de Moraes in providing part of the music for the play Orfeu de Carnaval (1956), that later gained wide recognition in the film Black Orpheus. The lyrics for his most popular songs were written by de Moraes.

American jazz singers Ella Fitzgerald and Frank Sinatra prominently featured Jobims songs on their albums Ella Abraca Jobim (1981) and Francis Albert Sinatra & Antonio Carlos Jobim (1967), respectively. Jobim is recognized the world over as one of the most influential composers of the 20th century. His first album, Sinfonia Do Rio De Janeiro, was recorded in 1954, with Billy Blanco.

Jobim was buried in the Cemitério São João Batista in Rio de Janeiro. The International Airport of Rio de Janeiro is now named in his honor.

Because of you, I don’t use lipstick anymore
I’ve torn my shirt, diminished my tone
I changed my friends for someone who demolishes me
Because of you, I can’t go home
Because of you, I lost my liberty
I gave you my life, I only did your will
I fought with the world, I let go of everything
I didn’t look back
And now you come
Telling me you don’t want me anymore

The voice and piano of Jobim, performing his original composition, “Por Causa De Voce” (Because of You)

Frank Sinatra and Antonio Carlos Jobim in concert, 1967 (excerpt/ three of Jobim’s songs, including the most famous, “Ipanema”)

love is universal, shades of love, songwriter of love