In Praise for the Eternal Music of Earth: Orpheus 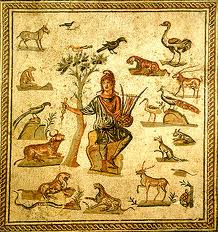 09 Apr In Praise for the Eternal Music of Earth: Orpheus

“Fiction reveals truth that reality obscures,” wrote Ralph Waldo Emerson, one familiar with the language of ancient western and eastern mystical texts. In his groundbreaking work, The Legends of Genesis, Hermann Gunkel noted that the function of myth is to reveal perennial and universal truths that turn the head of history toward the transcendent and eternal.

The historical life and imaginary legends of Orpheus have so blended into one that it is a labyrinth and maze, whose exits are as manifold as the entrances. What I find the most compelling is the historical fact that paintings of  Orpheus have been found in the catacombs of Rome, where secret meetings and agape feasts—those clandestine celebrations of the resurrected Christ— were held. Scholars have given many reasons as to why the figures of Orpheus and Christ were blended in the early centuries (see my edited Wikipedia below), but the fact itself is indisputable. Also,no one can disagree that both early Christians and followers of orphic cults had certain rites of initiation for membership  into their groups.

What is a rite of initiation? This is a blog and not a book or scholarly essay, so I’ll be brief. A rite of initiation is a trace, a faded photograph of an authentic pathway to and from the world and beyond that point to individuals who successfully made the transition from this life to the next and . . . return to the world, transfigured. Those victorious ones continue to assist seekers back across the bridges they have built between time and eternity. By the time groups begin “acting out” this journey of journeys, they can’t help but digress into theater, along with the construction of stages and scripts, including music.

The composers Igor Stravinsky, Franz Liszt, Jacques Offenbach and Ralph Vaughan Williams—among others— have memorialized the descent of Orpheus into the underworld to rescue his beloved, including when he mesmerized the animals of nature through his golden lyre. Yet, these were not the original sounds of the risen Orpheus. Not even the fragments of orphic hymns and attempts to reconstruct the music of ancient Greece come close to the real music of  . . . the individual man.

Perhaps the Austrian poet, Rilke, has come the closest to capturing a true scent of the rosy path of Orpheus, strewn with petals and thorns. In Rilke’s last poem in his “Sonnets to Orpheus” (written in 1922 soon before he died ) he wrote,  “And when the earthly has forgotten you, To the silent earth, say: I flow. To the rushing waters speak: I am.”

We are getting closer now to the genuine article. A faint melody of the music of Orpheus can best be heard in the rustling leaves of the wind and the trickling water of the stream, and in the whimper and roar and cry and ecstasy of the animals of creation who know and who have no question as to Who They Really Are.

From Wikipedia (with my edit & additions):

Ancient sources accept the historical existence of Orpheus. Strabo (64 BC – c. AD 24) presents Orpheus as a mortal, who lived and died in a village close to Mt. Olympus. “Some, of course, received him willingly, but others, since they suspected a plot and violence, combined against him and killed him.”

The ancient Greeks venerated Orpheus as the greatest of all poets and musicians: it was said that while Hermes had invented the lyre, Orpheus perfected it. He was one of the handful of Greek heroes  to visit the Underworld and return; his music and song even had power over Hades.He is also said to have studied in Egypt. He was credited with the composition of the Orphic Hymns, a collection of which still survives.

The historian William Mitford wrote in 1784 that the very earliest form of a higher and cohesive ancient Greek religion was manifest in the Orphic poems. W.K.C. Guthrie wrote that Orpheus was the founder of mystery religions and the first to reveal to men the meanings of the initiation rites.

Some sources credit Orpheus with further gifts to mankind: medicine—more usually under the aegis of Aesculapius—and writing, which is usually credited to Cadmus. Orpheus was an augur and seer; practiced magical arts and astrology, founded cults to Apollo and Dionysus and prescribed the mystery rites preserved in Orphic texts.

Legend holds that while living with his mother and her eight beautiful sisters he encountered Apollo who— as the god of music—gave Orpheus a golden lyre and taught him to play it.Orpheus’s mother taught him to make verses for singing.

The most famous story in which Orpheus figures is that of his wife Eurydice, but this legend is considered to be entirely mythological in origin.

(Below is an excerpt from J. Richard Stracke, emeritus professor of English, Augusta State University on Christ & Orpheus)

“Early Christian images tend to represent Christ through representative figures such as a lamb, a shepherd, or even Orpheus from classical myth. Images of shepherds and Orpheus were common, and indeed resemble each other. The choice of Orpheus relates to his nearly successful rescue of his lover, Eurydice, from Hades, an obvious parallel both to the story of Christ’s descending into hell after his crucifixion and to the belief that the Christian individual is saved from the fires of hell by Christ’s sacrifice on the Cross. However, the Christ/Orpheus images do not represent this aspect of the Orpheus legend. Instead, they adopt the motif, common in art, of animals gathering around Orpheus to hear his sweet music.”

ORPHEUS with his lute made trees
And the mountain tops that freeze
Bow themselves when he did sing:
To his music plants and flowers
Ever sprung; as sun and showers
There had made a lasting spring.

Every thing that heard him play,
Even the billows of the sea,
Hung their heads and then lay by.
In sweet music is such art,
Killing care and grief of heart
Fall asleep, or hearing, die.

Daemonia Nymphe  is a Greek music band established in 1994 by Spyros Giasafaki and Evi Stergiou. The band’s music is modeled after ancient Greek music and is often categorized as ethereal, neoclassical, neofolk, or gothic. The ensemble uses authentic instruments, including the lyra, varvitos, krotala, pandoura and double flute, which are made by the Greek master Nicholas Brass. Their shows are theatrical, with members wearing masks and ancient dress. Their lyrics are drawn from Orphic and Homeric hymns.

The soundtrack of this video is based on the “Orphic Hymn to Dionysos” of the 2nd century C.E.The lyrics are the words of the original Greek text with an English translation by Andonis Theodoros.

ORPHIC HYMN TO THE KOURETES performed by Daemonia Nymphe

Translated by Thomas Taylor (1758 -1835), an English translator and Neoplatonist, the first to translate into English the complete works of Aristotle and of Plato, as well as the Orphic fragments.He was also an outspoken voice against corruption in the Christianity of his day, and its shallowness.

“Orpheus with his Lute”, by  Ralph Vaughan Williams (1872-1952), written relatively early in his career.