In A Dark Time She Gave the Light of Love: Julian of Norwich 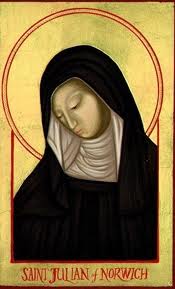 03 Feb In A Dark Time She Gave the Light of Love: Julian of Norwich

It is not surprising that the first female author in human history to write a book in English wrote it on Love. She also happened to be a mystic. This grand woman was Julian of Norwich. My introduction to the writings of the Western mystics came about during my first year as a novice monk in a North Country forest abbey in Minnesota. Male and female Christian recluse contemplatives had been around since the 2nd century A.C.E  in the deserts of Sinai and Egypt. They sought there a refuge from the external world of maya (illusion). But what they often found was that illusion not only existed externally, but internally as well. You can run but you cannot hide. Make no mistake. Illusion is a powerful thing. Most every one at some point in their life  has awakened from a dream in a sweat as if what they dreamed “really” happened. The  movies in front of our eyes outside the typical theaters and stages are no different.

By the 14th century many seekers of Reality (the God-within) not only dwelled in the forests, mountains and deserts, but some lived in the cities and villages. The best of these were annexed to churches and given small cells where they lived in solitude, sometimes with a window open at certain times of the day for visitors to bring their sorrows and woes to them for a word of encouragement and blessing. Julian was one of these. (See the second video below for a brief documentary on the cell of the mystic, Julian of Norwich.)

In my first years as a monk I discovered for myself through personal trial and experience that the contemplative life is fraught with internal illusion and worse, delusion. Contemplation is as much a process of hits and misses as much as it is a goal. Siddhartha Gautama (Buddha) taught that the cure for this inborn ailment of the psyche was to “take refuge” —not in any external thing—but in the name of the master, the word of the master, and through internal links with companions of like intent and desire.

Since I happened to find myself in a Christian monastery, I was taught to take refuge in the name of Jesus, saying in silence the master’s name “Yeshua” into my heart in alignment with my breathing. It didn’t stop the shadows within and without from making their appearances, but did help with decreasing their size and force. Eventually, I found that only quiet observation and acceptance of whatever came up in my awareness rendered the best fruits of inner peace. This became my principal practice, to take refuge in the Highest Real, not only internally but outside of me as well. I  have found that Love—in the form of gradual acceptance  of my own shadow and the shadow of others— and Surrender to a Higher Power always wins out over anger, attachment, and fear, the three major heads of the seven-headed cobra that  resides over our illusions.

Julian of Norwich: (born 1342, probably Norwich, Norfolk, Eng. — died after 1416) English mystic. After being healed of a serious illness (1373), she wrote two accounts of her visions; her Revelations of Divine Love is remarkable for its clarity, beauty, and profundity. She spent her later life as a recluse in Norwich.

“Let nothing disturb you. Let nothing frighten you. Everything passes away except God.”

“The greatest honor we can give Almighty God is to live gladly because of the knowledge of his love.”

“God loved us before he made us; and his love has never diminished and never shall.”

“If there is anywhere on earth a lover of God who is always kept safe, I know nothing of it, for it was not shown to me. But this was shown: that in falling and rising again we are always kept in that same precious love.”

“Our Savior is our true Mother in whom we are endlessly born and out of whom we shall never come.”