His Voice Gently Rains Upon the Desert:Hamza El Din 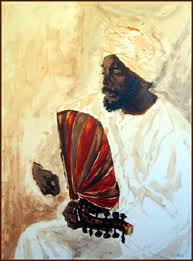 07 Jan His Voice Gently Rains Upon the Desert:Hamza El Din

During my tenure as a Benedictine monk, I had traveled abroad for studies in Israel, Greece, and Egypt. My experiences there had spawned an album of mystical songs I recorded in 1982 called Time of the Harvest. Years later, after a pilgrimage to India in 1999, I was so profoundly moved by the spiritual emotions of love and longing conveyed by the musicians I heard while there, I set out to compose music settings of my own to the mystical poetry of Hafiz, Rumi, Mirabai and others. In collaboration with Eric Peterson (Egyptian tar, South American udu) and Sheila Gamble (vocals, Egyptian tar), I composed and recorded two albums of songs (Pouring Light and Diamond or Stone)during the first decade of 2000. (Both are now available on ITunes).

It was during this period that Eric introduced me to the Nubian desert songs of Hamza El Din. In 2004—just two years before his death— we attended one of his last solo concerts in a small theater on the campus of Emory University, where he featured his voice, the oud, and Egyptian tar. It remains one of the defining moments of live stringed instrument performances I’ve experienced, among which range from the Spanish guitar of Andres Segovia to the Fender Stratocaster of Jimi Hendrix.

There are long-forgotten memories that are conveyed to the listener when a master musician plays an ancient instrument. The sounds of the plucked strings trigger the heart, sending it into a profound state of longing and restlessness for its origins, its divine home, the heaven of earth, and the earth of heaven.

Below (in addition to two pieces played by Hamza El Din) I have added a short essay he composed on the use of music to help sleeplessness and memory, utilizing the research of the ancient 10th century physician, Avicenna.

Wikipedia: Hamza El Din (1929 – 2006) was a Nubian composer, oud player, tar player, and vocalist. He performed with the Grateful Dead, most famously during their Egypt concerts of 1978. In this period, he also mentored a number of musicians, including Sandy Bull. As early as the 1960’s his performances had attracted the attention of  Joan Baez and Bob Dylan. Following his appearance at the Newport Folk Festival in 1964, he recorded two albums for Vanguard Records released 1964–65; his 1971 recording Escalay: The Water Wheel is recognized as one of the first world music recordings to gain wide release in the West, and was claimed as an influence by some American minimalist composers, such as Steve Reich and Terry Riley as well as Grateful Dead percussionist Mickey Hart.

Born in the village of Toshka, near Wadi Halfa in southern Egypt, El Din was originally trained to be an electrical engineer. After working in Cairo for the Egyptian national railroad, he changed direction and began to study music at Cairo University, continuing his studies at the Academia Nazionale di Santa Cecilia in Rome.

El Din held a number of teaching positions on ethnomusicology in the United States during the 1970s, 1980s and 1990s (Ohio University, University of Washington, and the University of Texas). He eventually settled in Oakland, California after studying the biwa in Tokyo, Japan during the 1980s. His album Eclipse was produced by Mickey Hart and he performed with the Kronos Quartet on an arrangement of Escalay in 1992. His pieces are often used in ballet performances and plays. In 1999, he released his last album, A Wish.

Avicenna On Music and Healing

Avicenna (980-1037)  or Ibn Sina as he is called in the middle east, was a descendent of Sinai people and a physician. He is considered as one of the forefathers of modern medicine. He saw that people were sometimes healed by music and he wanted to understand how that healing works.

Sleeplessness occurs when you’re out of balance yet trying to sleep, between 11 PM. and 1 AM. He found out that if the note of C was played around sleepless people, they would doze off easily. That hour of the night is associated with C (Do). C is a tonic center from which to set out in many ways of scales and modal ways. When you look outside at the sky, it would be deep deep blue when it is a moonless night, but when it is full moon night, it is bright radiant blue. The color of the note C is Blue, as the Moon, the Midnight, the North and Coldness. All of these share the same energy vibrations. Look at where your watch points when ending the numbers of hours of the day. Hundreds of years later, inventing the watch, the twelve atop your watch dial is at the top of the circumference of the Earth, to the North Pole, the land of ice. Ice and cold.

In the absence of music, take a cold shower, look at a blue color, or put your head to the North while lying down, then you will find you can sleep more easily.

Insomnia at night! What is its opposite? The South, the Sun, the Heat, the color Red represent the Noon time. Between 11 AM and 1 PM there are those who suddenly become drowsy in the midst of the hustle bustle of work, they feel sleepy. They are out of balance with the hectic world around them. It is the Daytime insomnia! G (Sol) is the fifth tonic for C, therefore it is the note of midday. It is the time of hot bright Sun. The hot represents Red and the direction of South. So to energize people and get rid out of sleepiness, they should hear the music centered around G  or if there is no musical instruments around, they can take a hot shower, look at the color of Red, or face South. They will feel themselves being energized again.

Avicenna had divided the circle around us, whatever you might call– the globe, the circumference, the orb. He looked to the West, where the Sun sets in the evening, and found out another simple daytime distress, in the realm of memory. He noticed that there were some people prone to repetition or forgetfulness at the end of the day, at the time of sunset. He connected this to the West (where the sun sets), and the pink color of it. There are two simple memory problems. One is thinking about so many things at the same time, so it is easy to forget other little things – like you sometimes struggle to find keys or forget appointments. The other is being unable to get out of one’s mind  something that has happened in the past. In the logic of music, the note D (Re) is the fifth tonic of G (Sol).Hearing compositions built around D will balance and heal one who has memory problems.

The opposite direction is on the other side, the fourth cardinal direction, the fourth quarter, to the East. The note is A (La) as the fifth dominant of D. The note of A represents the hours of the beginning of the day, childhood, curiosity, high energy. A’s color is green. The color that you can first make out as the dawn breaks after the gray. This is time of the day to look ahead to the future.

So the East, the color green , the sunrise, beginnings, and the note A, (La), are equal in vibration. The note A balances curiosity and interest in man. Musically, if a musician will start a composition on A (La) and make it dominate in his composition cadenzas, he can play easily for hours passing through many modulations. The opposite issue occurs for the D (Re) tone. One can’t leave that mode easily and move to another.

The fifth of A, is E (Mi), at the tropic of Capricorn between noon and sunset, and at the same time halfway between sunrise and noon, about 3 and 4 o’clock in the afternoon, and between 9 and 10 in the morning. It is the color of Yellow. The note B (Si) as the 5th tonic for the E will represent the next opposite, the tropic of Cancer midpoint between midnight and sunrise at about 3 and 4 AM, or between sunset and midnight at about 9 and 10 PM. The light of just after the twilight, when the last pink is finished but the blue has not fully deepened, or out of the blue of the night before the orange of sunrise appears, between those hours of the day. It is the color of gray. The last fifth is the note F #, (Fa), the center where all the cardinal points meet, the place of without direction, it is still, mysterious and black in color, emotion and sadness.

Starting as a scholar, physician, and scientist, Avicenna (Ibn Sina )assigned qualities to the relations between vibrations, tones, colors, directions, and emotions, and came to these conclusions:

C (Do), midnight, north, color blue, the moon and cold

B (Si), mid-evening and mid-dawn, color gray, northeast and northwest

Imagine if your neighborhood were to be submerged under a flood of water. It is under this duress from which Hamza El Din’s A Wish  stems. How to keep such a place alive for the people of Nubia? It is one of the soul’s jobs to remember even older things.

The title track “A Wish” begins with a soft fade in that leads to you into the quick paced track. There’s a bright feeling to the song that’s highlighted by the lyrics themselves. Although the entire album is not sung in English, it nonetheless captures the emotions of longing and hope.

“A Wish”: (In Key of “D”, tunes one to the sense of remembering, evening, west, color pink, sunset, cool)