Grass is Blue For This Old Soul From Texas: Sarah Jarosz 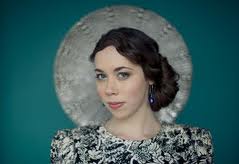 14 Dec Grass is Blue For This Old Soul From Texas: Sarah Jarosz

Already playing her original songs with bluegrass greats by age twelve, Sarah Jarosz seemed to others like she’d been performing and writing much, much longer than that.

The term “old soul” is an oxymoron, a redundancy. The soul is the most ancient part of every one of us. So when we speak of this or that person being an “old soul,” we mean that that most eternal part of them shines through and utilizes their body in a way that says they have honed the skill of living over a span of time beyond what is possible in any one given lifetime.

Artists are not the only ones who have been here before. These beings just stick out more because they are able to articulate in a variety forms a high level of love and wisdom. Seasoned sojourners convey a certain intelligence of heart and age of soul. It’s difficult to define exactly and with any precision. Measuring the inner age of a human being  is an art, not a science. But when ripened individuals come into the world, there seems to be a purpose—often a string of purposes—that shapes their existence. These reasons for being can range from a unique manifestation of love, knowledge, service and beauty accepted by many, to a less-defined path of “crazy wisdom,” that unsettles, shakes, and upsets the status quo and its protocols.

How many old souls walk alone, are misunderstood, have few friends, or have not produced the measurable success by the world’s standards? Probably more than what can easily be surmised. There are many lessons on this ancient path, some of which demand a certain anonymity in the graduate school of tried and tested character.

I’ve chosen a particular song of Sarah Jarosz’s that goes in the category of her alternative—not bluegrass—style. Perhaps it is only my subjective thinking, but experimenting outside the traditional bluegrass genre might be one of the reasons why Jarosz came back.

The song is “My Muse.” Hearing it for the first time made me wonder whether or not she composed it from the “other side” and wanted to manifest it in the world of musical and rhythmic form when she returned to the world. It has been said that everyone has the potential of conjuring up the muse, that “inspirer” within us that will demand from us an expression of the deeper realities it sees, hears, tastes, touches, and smells.  Not to have welcomed the muse into one’s life would be a great tragedy, like living one’s entire life closed off to love and the magnificent and thrilling experience of surrender.

Jarosz was born in Austin, Texas on May 23, 1991, but was raised in Wimberley, Texas. She picked up the mandolin at age 10 and has been called “a songwriter of uncommon wisdom” by the Austin Chronicle. Fourteen year old Sarah Jarosz emerged on the scene around 2005 as someone to watch. Jamming onstage with bluegrass icons David Grisman and Ricky Skaggs, she played her mandolin with a sure touch and real joy. It looked and sounded comfortable in her then twelve-year-old hands. She started writing songs on the guitar and took up the banjo. While her instrumental talents are formidable, “Sarah is a singer. She’s just flat got it” -Tim O’Brien. She also plays clawhammer banjo and guitar and wrote all but two of the thirteen tracks on her album. Jarosz began attending the New England Conservatory of Music in the fall of 2009.

I spin around in your love
In a place of wonder
I want to wander
With you, my muse

In a dream of carousels
On waves in caravels
Collecting seashells
For you, my muse

Delightfully exhausted
Willingly this way
Always yours, always yours I’ll stay
With you, my muse