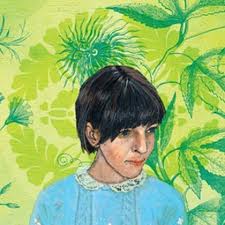 When the digital clock “unstrikes”—with  its eerie silent movement— the hour of the soul’s night, a voice such as hers will heal and hone the opened heart, singing its song of  love’s wine and woe in this world of stormy seas.

Along with Sufjan Stevens, another singer-songwriter has flown in from the beyond to Michigan: Rosie Thomas.

I could have sworn when I first heard the song “Gradually” (see below) that Rosie was at least in her forties, had two marriages behind her, and oodles of tragedy in her wake. How does one explain the capability of such intimacy that cradles you in the heart’s deeper nests of experience?

There is an irony in all of this, however, because searching youtube for the song I wanted to share here, I quickly discovered that Rosie’s alter comedy persona (Sheila Saputo) bleeds into “Rosie”, the resonator with the heart’s eternal sorrow.

Now that privacy for any performer who has a digital camera pointed at them is nigh impossible, the days of opening up an album or book —and entering one’s own inner world with an artist’s muse— is becoming more and more rare. Who would want to see a parody youtube of a look-alike Tolstoy advertising for the benefits of lexipro and xanax to get through the hectic day before or after reading War and Peace on your Kindle? Well, actually, that might actually be funny, but I think you know what I’m trying to articulate. You will have to filter out the wheat from the chaff of what you see about Rosie Thomas and any other public figure when you visit the internet to find out more about them. I believe that her voice from love’s wounded places deserves it.

Wikipedia: Rosie Thomas is an American singer-songwriter, originally from Michigan. It was through mutual friends that she met Trey Many and began playing shows with Velour 100. They recorded one EP together and played a few short tours, where she met Damien Jurado and Pedro the Lion. She then moved to Seattle to briefly attend Cornish College before deciding to focus on a solo recording career.

Thomas also performs as a stand-up comedian under the name Sheila Saputo.

Her appearance on the song “Parking Lot”, from Damien Jurado’s album Ghost of David, brought her to the attention of famed record label Sub Pop who signed her in 2000.

Her debut album When We Were Small was released on January 22, 2001. The album featured Eric Fisher (who Thomas met at Cornish College in Seattle) on guitar and keyboards and Andy Myers on drums. Fisher and Myers returned for 2003’s follow-up Only with Laughter Can You Win.

She released her third album, If Songs Could Be Held, in 2005.

In March 2006, Thomas was invited by Toronto indie rock label Paper Bag Records to exclusively contribute to their See You on the Moon! compilation with her song “Faith’s Silver Elephant”.

In April 2006, Pitchfork erroneously announced that Thomas and American musician Sufjan Stevens were having a baby together, but were forced to print a retraction. Denison Witmer and Thomas later admitted it was an April Fools’ prank.

Her album, These Friends of Mine, was released on December 12, 2006 through her own record label Sing-A-Long Records.

She released a holiday album called A Very Rosie Christmas in November 2008 through her own record label. Thomas also acted in the 2009 film Calvin Marshall and was the subject of the 2009 documentary All the Way from Michigan Not Mars.