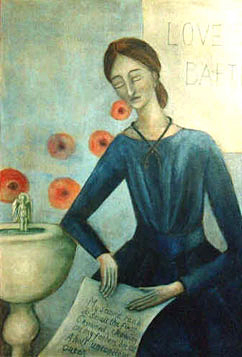 I have been intrigued by the sources of inspiration of our great poets (Dante’s Beatrice, for instance) and how their muses have been interpreted—and often distorted— by various accounts of historians who have their own agendas. The Emily Dickinson who has come down to us appears more as a nun than a woman, who must have written all of her great poems in solitude at her father’s home, unfiltered and untainted by human love.

I personally hold that the divine can be directly experienced through the human form as well as without it. What do you think?
What do you believe? What have you experienced?

The following was written by a Dickenson scholar, Christopher Benfey.

About Christopher Benfey:
He is an American literary critic and Emily Dickinson scholar. He is the Mellon Professor of English at Mount Holyoke College.

“Emily Dickinson’s Secret Lover!
Why the big news is being ignored.”
By Christopher Benfey
Posted in The Slate, Thursday, Oct. 9, 2008

“. . . Genevieve Taggard . . . best known for her Depression-era populist verse, published a vividly written biography of Emily Dickinson in 1930 after teaching for a year at Mount Holyoke, Dickinson’s alma mater. Taggard discovered what she called the “purloined valentine,” sent by Dickinson in 1850, inviting a mysterious someone to “meet me at sunrise, or sunset, or the new moon.” Subsequent scholars have assumed [George] Gould was a likely recipient but left it at that. Taggard, however, built her narrative around the youthful love affair of Emily and George, blaming the breakup of the engagement on Dickinson’s father but ascribing a different motive, one more in line with her proto-feminist approach . . .

It’s startling to go back to Taggard’s nearly forgotten and rarely read book and find how much evidence she tracked down for her tale of star-crossed lovers. She quotes several sources, including a friend of Lavinia’s, all of whom requested anonymity but confirmed the basic details of the affair. So, why wasn’t her story believed?

Once again, it was the popular image of shade-seeking Dickinson holed up in her father’s house that prevailed. As [Carol Damon] Andrews argues, there was a concerted effort to suppress Taggard’s findings, led by Susan Dickinson’s daughter, Martha, and Amherst College professor and biographer George F. Whicher, who announced that he intended “to terminate the persistent search for Emily’s unknown love.” Whicher attacked Taggard’s book as “untrustworthy” and suggested that its plotline was derived from the “stale formula of Hollywood romance and Greenwich Village psychology”—a sly dig at Taggard’s bohemian and socialist convictions . . .

. . . It turns out that Emily Dickinson had the kind of early romantic entanglement and disappointment that so many young people have. They find someone congenial; they exchange gifts and promises; their parents intervene for various acknowledged and unacknowledged reasons. If such ordinariness seems somehow beneath the dignity of one of our supreme poets, that’s probably why even this latest challenge to the image of isolated Emily has gotten so little attention. Alas, there’s nothing mysterious or mystical here except what Emily Dickinson made, in her extraordinary poems, of her all-too-human disappointment.”

You constituted Time
I deemed Eternity
A Revelation of Yourself
‘Twas therefore Deity
The Absolute removed
The Relative away
That I unto Himself adjust
My slow idolatry.
______________

‘Twas my one Glory
Let it be Remembered
I was owned of Thee.