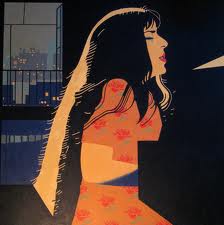 The Path of Love is fraught with danger. One can lose one’s heart by answering to the call of the beloved that takes so many forms . . . even one’s soul can elude the seeker of love’s agony and bliss, who knows for how long, lifetimes even.

Like great historical tragedies (John Kennedy’s assassination or John Lennon’s murder) many recall exactly where they were in these moments. But what of the great events in time where timelessness seemed to shine through, not like a sun, but more . . . like moonlight? Each of us have these, too, but most of us keep silent about them, don’t we?

Laura Nyro was compelled not to. Critics and naysayers might respond that this work of Laura Nyro’s is too dark and well, drug-induced. But actually, my deeper sense tells me (having worked closely with addicts for almost a quarter century)that Nyro’s dance with drugs was her failed attempt to close the door on something too magnificent for her heart to contain.

I know exactly where my heart was when I first heard the ecstatic sorrow in Laura Nyro’s voice in “You Don’t Love Me When I Cry”  that I have placed here for you if you wish to give it a listen.  It forever changed my songwriting, or more aptly put . . . sent me on a road of seeking for just one experience of that eternal feeling that peeks though the curtains of time. Since then, I have found so many sometimes I wonder which side of the curtain I dwell in.  At these moments, beyond the ticking of the clock, we can touch It, smell It, taste It, hear It . . . see It . . . know It, and in that tacit knowing . . .  surrender to It.  But careful . . . It is not for the faint of heart. Such experiences will destroy all of what you thought was your true self, but were mistaken.

It was released in the autumn of 1969 on the Columbia Records label. It is generally considered by rock critics and Laura Nyro aficionados to be her greatest musical achievement. The album was helmed by Nyro, with the assistance of producer and engineer Roy Halee.

In 1969, Nyro was one of the most popular pop songwriters, and various groups including The 5th Dimension, Three Dog Night, and Blood Sweat and Tears had enjoyed hits with her compositions. Thanks to the strong word of mouth trailing her work, New York Tendaberry became her most commercially successful record, peaking at #32 on the Billboard 200, formerly known as the Pop Albums chart.

In 2003, the album was included in Mojo’s Collection book of the best albums of all time, and the reissued version was voted among the Best Albums of 2002 in Uncut magazine.