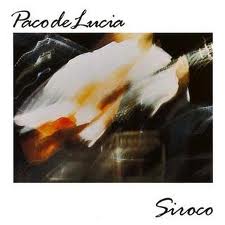 There is a mystery that is unfolding to me as I move along the road of the internet to discover works of art that enrich the soul on its journey back to the “other side.” Music, paintings, poems, writings of earth and heaven, lives of compassion that leave their mark of egolessness, are all testaments that there is another realm that exists alongside this world of matter, gravity, and density.

There is something about the cante jondo (“profound song”) of the flamenco-gypsy world that captivates my soul. Maybe this is because its music does not identify itself with the academic halls of refinement, but chooses to fly along the ribbon of wind and fire, the song of the road, its deserts and hills, to answer a call which comes from an invisible place.

I recall traveling by train in the early 70’s through the Andalusian plains of  Southern Spain toward the coastal town of Algeciras, the home of Paco de Lucia, who has been called “the greatest guitarist of the flamenco genre.” I—along with my companion of the road, Giam—had mapped out a hitchhiking pilgrimage through Europe and North Africa, a four-month odyssey that transformed our lives. I did not know of Paco de Lucia then, and had only been exposed to the classical Spanish guitar of Andres Segovia.

Unlike the classical flamenco of Carlos Montoya, Paco chose to identify both with the folk-gypsy roots of flamenco that refuses to sacrifice rich emotion for dry technique. It is also uncommon for a music virtuoso so skilled in a certain tradition as he, to allow for a variety of influences, such as American jazz, that—along with the blues—defines the gypsy music of North America.

Deep down there is a lurking gypsy in everyone. It is a word which transcends the Andalusian plains, and more fittingly describes the “heart,” “soul,” “longing, and most of all, “love” that drives us all to that mental condition of “good crazy.”

Paco de Lucía, born Francisco Gustavo Sánchez Gómez (in Algeciras, Cádiz in 1947), is a flamenco guitarist and composer. Author Dorien Ross claims in his book “Return to “A” that de Lucía is one of the finest guitarists in the world and the greatest guitarist of the flamenco genre. He is noted in particular for his dexterity, technique and strength in his right hand, capable of executing extremely fast and fluent picados (finger-picking).

He is a leading proponent of the Modern Flamenco style, and is one of the very few flamenco guitarists who has also successfully crossed over into other genres of music such as classical and jazz. He is the winner of the 2004 Prince of Asturias Awards in Arts and in 2010 was awarded an honorary doctorate by Berklee College of Music in Boston.

His father introduced him to the guitar at a very young age and was extremely strict in his upbringing, forcing him to practice up to 12 hours a day, every day. At one point his father took him out of school to concentrate solely on his guitar development. Combined with natural talent, he soon excelled and in 1958, at age 11, he made his first public appearance on Radio Algeciras. A year later he was awarded a special prize in the Jerez flamenco competition. In 1961, he toured with the flamenco troupe of dancer José Greco. In 1964, he met Madrileño guitarist Ricardo Modrego with whom he recorded three albums: Dos guitarras flamencas, Dos guitarras flamencas en stereo, and Doce canciones de Federico García Lorca para guitarra. Between 1968 and 1977, he enjoyed a fruitful collaboration with fellow New Flamenco cantaor (Flamenco singer) Camarón de la Isla. The two recorded 10 albums together.

In 1979, de Lucía, John McLaughlin, and Larry Coryell formed The Guitar Trio and together made a brief tour of Europe and released a video recorded at London’s Royal Albert Hall entitled Meeting of the Spirits.

In 1995, he recorded with Bryan Adams the hit song and video “Have You Ever Really Loved A Woman” on the soundtrack for the movie Don Juan DeMarco. Through his wide discography he has advanced the technical and musical boundaries of his instrument. The University of Cadiz recognized de Lucía’s musical and cultural contributions by conferring on him the title of Doctor Honoris Causa on March 23, 2007.

Although there are a variety of moods expressed in Flamenco, the “bulería” is the most brilliant and intense of all the styles. It is the rock  & roll music of Flamenco. Bulerias originated in the “Jerez” region in Spain and the word comes from the Spanish “burlar,” meaning to mock, outwit, or escape danger.

(Paco de Lucia gives a live performance of a Buleria)