Troubadour on The Path of Love: Tim Buckley 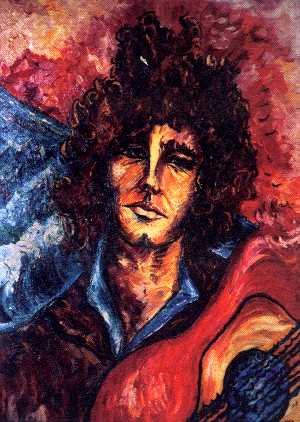 03 Nov Troubadour on The Path of Love: Tim Buckley

Who knows the ways of deep soul? Should we follow its paths, they may very well lead us out of the old books of laws and spells and contracts and comforts.

But then,we will find ourselves in rarely explored territory. Only the strongest survive the torrents and floods and storms and thunders that can issue forth at any given moment.

Father & son. These were two troubadours of love who knew each other only through their mutual resonance with a muse that uplifted, sang through, and finally, drowned both of them.

Both Tim and Jeff have achieved posthumous notoriety: “success” after their death. Hmmm . . . success after death. What few know about those who have wandered on the treacherous path of love is that ego or fame is rarely the priority, motivation, cause, or purpose of their lives. They know of no planned “career” at all, really. These just follow . . . follow the sounds and scents and scenes of something grander than what society and situation have laid out before them.

Artists are the illuminative signposts of potential and possibility that touch places inside each and every one of us, that inspire us to become . . . well, ourselves. But that takes a while . . . a very long while.

I’ve chosen to showcase Tim Buckley’s “Once I Was,” because it was the first teaching-through-song that I received on reincarnation when a young man. In fact, it remains the one “sung teaching” on the subject that I have ever heard. It answers to the question, “Why do I keep coming back?” and “Have I loved this being before?” I have also posted below Tim’s song, a short but provocative piece on Tim & Jeff. You will hear his son’s ”fallen angel” voice, as well.

Wikipedia: Timothy Charles Buckley III (1947 – 1975) was an American vocalist, and musician. His music and style changed considerably through the years; his first album (1966) was mostly folk oriented, but over time his music incorporated jazz, psychedelia, funk, soul, avant-garde and an evolving “voice as instrument,” sound. He died at age 28, leaving his son Jeff Buckley from his marriage to Mary Guibert.

Scott “Jeff” Buckley (1966 –1997), raised as Scotty Moorhead, was an American singer-songwriter and guitarist. He was the son of Tim Buckley, also a musician. Buckley amassed a following in the early 1990s by playing cover songs at venues in Manhattan’s East Village, such as Sin-é, gradually focusing more on his own material. After rebuffing much interest from record labels and his father’s manager Herb Cohen, he signed with Columbia, recruited a band, and recorded what would be his only studio album, Grace.

While awaiting the arrival of his band from New York, he drowned during a spontaneous evening swim — fully clothed — in the Wolf River, when he was caught in the wake of a passing boat. His body was found on June 4, 1997.

Chart success came posthumously; with Leonard Cohen’s song, “Hallelujah” he attained his first #1 on Billboard’s Hot Digital Songs in March 2008 and reached #2 in the UK Singles Chart in Christmas 2008. Buckley and his work remain popular and are regularly featured in ‘greatest’ lists in the music press.