The Soul of Jazz is Timeless: John Abercrombie 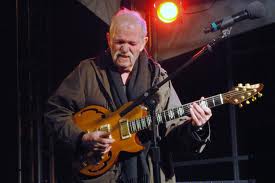 03 Mar The Soul of Jazz is Timeless: John Abercrombie

The layers of the unconscious are numerous and its ocean vast. Just beneath surface consciousness lies our unexpressed  emotions, the bubbling spring of our dreams and the subterranean—as well as ethereal— worlds behind the veils of  art, music, poetry, and every possible and manifested creative expression given to us, made by us, or channeled through us.

A work of art can trigger what has been lived , what has yet to be lived, and what is being lived . . . inside as well as outside the matrix of what most generally call, “the real.” In this sense, the word “timeless” does not necessarily mean eternal or continuous or even, perennial.

The timeless includes all that is not governed by expectation, schedule, or contract. The train arrives when it arrives and goes where it will. There is no baggage allowed on this train. Only you. Take it or let it pass. If you take it, it will transport you to regions where there is no sound of the tick tock of the clock, no bell, no ring, no punctuation mark or period, only . . . infinite elipses.

I have selected three pieces of John Abercrombie’s music  for your listening journey (see below). I begin with a more recent solo guitar performance because of the particular timeless realm it conveys seems to evoke the wisdom of a meditative sage. Then, two pieces from his trio masterpiece recorded almost four decades ago: Timeless.

Born in 1944 in New York, Abercrombie grew up in Connecticut, where he began playing the guitar at age 14. Like many teenagers at the time, he started out imitating Chuck Berry licks. But it was the bluesy music of Barney Kessel that attracted him to jazz. Abercrombie enrolled at Boston’s Berklee College of Music and teamed up with other students to play local clubs and bars. One of those clubs, Paul’s Mall, was connected to a larger club next door, the Jazz Workshop, where Abercrombie ducked in during his free time to watch John Coltrane and Thelonious Monk.

Abercrombie’s appearances at Paul’s Mall led to several fortuitous meetings. Organist Johnny Hammond Smith spotted the young Abercrombie and invited him to go on tour while he was still a student. During the same period, Abercrombie also met the Brecker Brothers, who invited him to become a new part of their group Dreams, which would become one the prominent jazz-rock bands of the late 1960s and early 1970s. Abercrombie appears on the group’s eponymous debut album.

From there, he moved to partnerships that he would shuffle and reshuffle for the next 20 years.

His affiliation with Feldman, in a quartet that included Marc Johnson and drummer Joey Barron, ushered in a period of looser, freer, almost improvisatory playing. “I like free playing that has some relationship to a melody; very much the way Ornette Coleman used to write all those wonderful songs and then they would play without chords on a lot of them,” he told AAJ. In fact, Abercrombie’s work from this period has been compared to chamber music, with its delicacy of sound and telepathic communication between musicians.

Throughout the 1990s and into 2000 and beyond, Abercrombie has continued to pluck from the ranks of jazz royalty–and be plucked for guest appearances on other artists’ recordings. One propitious relationship was with guitarist, pianist, and composer Ralph Towner, with whom Abercrombie has worked in a duet setting. (Abercrombie has also worked in guitar duos with John Scofield, for 1993’s Solar and with Joe Beck in Coincidence, released in 2007). Abercrombie has also recorded with saxophonist Jan Garbarek and bassist Eddie Gomez.

Abercrombie keeps up a heavy touring schedule and continues to record with ECM, a relationship that has spanned more than 30 years. As he told one interviewer, “I’d like people to perceive me as having a direct connection to the history of jazz guitar, while expanding some musical boundaries.” That, no doubt, will be his legacy.

The ongoing groups he has led or co-led include: