The Soul is a Gypsy With a Deep Song: Toni Gatlif 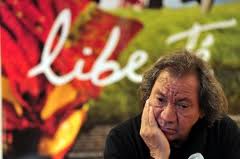 27 Feb The Soul is a Gypsy With a Deep Song: Toni Gatlif

Few —if any of us— have wandered a life time without a hearth or home save the heart. Several of us may have spent years wandering the deserts, mountains and forests to find our origins. Others of us may have spent months searching for ourselves in the imprints of the road, here and there. There are more in number who have gone on a retreat into the interior of the self for week, a day, or for an hour.

Even a minute’s wandering—if one is conscious—will render the truth that all of us are gypsies, between homes, longing to find who we are and where we belong. The disenfranchised, the disinherited, the separated, the poor ones— without possession and ill-born— are either all of us or none of us. This is one of the profound truths about the individual soul regardless of where it is born or out of what inherited caste or culture it emerges in this or that lifetime.

Deep song—or cante jondo to the flamenco gypsy world—comes out of this wandering of the heart and soul, bone and tooth, blud and guts. It is a vocation, not a vacation—an answer to the question of the spirit. When a voice or a dance or an instrument  arises out of this place we are in the world of deep song.

The story of the gypsy movie director, Tony Gatlif, is—in itself— a classic movie in the making (see below)I don’t mean “classic” in the sense of a Fred Astaire movie, but more in the category of Martin Scorsese’s Hugo, which recently picked up five oscars. What struck me most profoundly about Hugo was not it’s praise of film-making, but the adventure of the homeless boy at a train station early twentieth century Paris. Our eyes are riveted to him because we know we are him, homeless and in search of our true and ultimate identity. Gatlif has lived it himself for real and risen from the ashes to teach us lessons about ourselves.

When I first heard flamenco music on television when a child, I thought it was a woman in a low-cut dress playing castanets with her hands, a long-haired stud in black wearing boots, or a fast-handed guitar virtuoso from Spain. Little did I know that the different forms of flamenco all are part of the “deep song” —cante jondo— of the longing soul,  expressed through the toque — (flamenco guitar), the cante (singing), and the baile (dancing)

For those that wish a more involved treatment of flamenco’s origins, read  this excerpt by Roberto Lorenz on the forms of Flamenco music. Otherwise, skip this to a brief bio of Toni Gatlif and two exquisite excerpts of his film-making.

Foreigners often think that the essence of flamenco is the dance. However, the heart of flamenco is the song (cante). Although to the uninitiated, flamenco seems totally extemporaneous, these cantes (songs) and bailes (dances) follow strict musical and poetic rules. The verses (coplas) of these songs often are beautiful and concise poems, and the style of the flamenco copla was often imitated by Andalucian poets. Garcia Lorca is perhaps the best known of these poets. In the 1920s he, along with the composer Manuel de Falla and other intellectuals, crusaded to raise the status of flamenco as an art form and preserve its purity. But the future of flamenco is uncertain. Flamenco is tied to the conditions and culture of Andalusia in the past, and as Spain modernizes and integrates into the European community, it is questionable whether flamenco can survive the social and economic changes.

Cante flamenco can be categorized in a number of ways. First, a cante may be categorized according to whether it follows a strict rhythmic pattern (“compas”) or follows a free rhythm (“libre”). The cantes with compas fit one of four compas patterns. These compas-types are generally known by the name of the most important cante of the group. Thus

El baile flamenco is a highly-expressive solo dance, known for its emotional sweeping of the arms and rhythmic stomping of the feet. While flamenco dancers (bailaores and bailaoras) invest a considerable amount of study and practice into their art form, the dances are not choreographed, but are improvised along the palo or rhythm. In addition to the percussion provided by the heels and balls of the feet striking the floor, castanets are sometimes held in the hands and clicked together rapidly to the rhythm of the music. Sometimes, folding fans are used for visual effect.

Tony Gatlif (real name Michel Dahmani,) was born September 10, 1948 in the Algiers suburb of a family of Andalusian gypsies. He discovered the theater during walks to school but spent most of his time in the streets. He was illiterate and an apprentice thug, but the memories of the cinema when a schoolboy signed his destiny.

Recalling his youth, Tony Gatlif said: “There were nearly 500 children. We lived on the streets, free. We hated school, fences, and benches. We did not want to be locked up.” He remembers one of his teachers who finds the solution to the absentee issue of the school children. The teacher bought a 16 mm projector and played films once per week. Gatlif soaked it up.

Around the age of fourteen, wandering, he landed in France, between Marseille and Paris. He spent time in juvenile reformatories. This experience served the material for his first script: The Rage in Hand. But Tony Gatlif had a good star guiding him. While staying in a house of correction in the Paris region and with the help of a doctor he enrolled in a theater school.

Gatlif struggled for years to break into the film industry, playing in several theatrical productions until directing his first film, La Tête en ruine, in 1975. He followed it with the 1979 La Terre au ventre, a story of the Algerian War of Independence.

Since 1981 Gatlif’s work has been focused on the Roma people of Europe, from whom he partially traces his descent.

After making Gaspard et Robinson in 1990, Gatlif spent 1992 and 1993 shooting Latcho Drom, which was awarded numerous prizes. This feature-length musical film, often mislabelled as a documentary, deals with gypsy culture throughout the world around the theme of their music and dance. For Vincent Ostria, then journalist at the Cahiers du Cinéma, it was “the most genuine film of the year (1993 editor’s note).” A year later, Gatlif brought the world of the author J. M. G. Le Clézio (pen-name) to the screen in Mondo (1994).

His 2004 film Exils, won the Best Director Award at the 2004 Cannes Film Festival. His film Transylvania also premiered at Cannes in May 2006.

Latcho Drom (11 minute segment: The film takes the viewer on a journey west, from India to Spain, with stops along the way, to dramatize Romany’s nomadic culture. This journey takes place over a year’s time, from summer through fall and winter to spring. Gatlif holds his camera on the elemental essentials of this life: water, the wheel, fire, beasts of burden and of sustenance, colorful clothes, jewelry, musical instruments, song, and dance. Throughout, via song and dance, young and old celebrate, embody, and teach the cultural values of family, journey, love, separateness, and persecution.)