The Queen of the Blues Sang “At Last”: Etta James 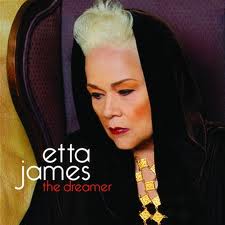 04 Jan The Queen of the Blues Sang “At Last”: Etta James

Although it is doubtful that Etta James ever penned a song herself, she didn’t have to. She gave every song its ultimate expression, whether it was the down and dirty “Tell Mama,” or “At Last,” the sublime song of praise to swimming in the ocean of life’s transforming loves.

Anyone who’s been gifted with just one of these loves in a lifetime has received passage to a doorway out of the black and white world of mediocrity and into the living color world where it seems only gods can dwell for long . . . that is, unless one is willing to have one’s limited ego slowly, slowly suffocated, until one has given up one’s own breath—at last— to the Breath.

This long and arduous journey is taught in the school of the mystic. In this school every love matters. Every relationship urges. Every beginning is felt deep down in one’s soul where Death has already started its cries of joy and sorrow. Every ending is surrendered to with complete recognition of what has been fully —or only partially— lived.

When it becomes our turn to say adieu to this world of glimmering lights, what will we say of our experiences of love? The only disappointment and regret will be for those times when we were afraid to risk everything for that one thing that would have given us life by destroying us.

Etta James is ‘breathing on her own’ again. She has been taken off a breathing machine and could soon be released from an intensive care unit, according to reports. The 73-year-old soul singing legend, who is terminally ill with leukemia, was placed on a respiratory machine last month (December 24). Her agent, De-Leon said: The hospital is preparing Etta for release from ICU to a step down unit.

Etta James (born Jamesetta Hawkins, January 25, 1938) is an American singer whose style spanned a variety of music genres including blues, rhythm and blues, rock and roll, soul, gospel and jazz. Starting her career in the mid 1950s, she gained fame with hits such as “Dance With Me, Henry”, “At Last”, “Tell Mama”, and “I’d Rather Go Blind” for which she claimed she wrote the lyrics. She faced a number of personal problems including drug addiction before making a musical resurgence in the late 1980s with the album, The Seven Year Itch.

At Last (1941, written by Mack Gordon and Harry Warren)

At last, my love has come along
My lonely days are over
And life is like a song
Oh, yeah, at last
The skies above are blue
My heart was wrapped up in clover
The night I looked at you
I found a dream that I can speak to
A dream that I could call my own
I found a thrill to rest my cheek to
A thrill that I have never known
Oh yeah, you smiled, you smiled
Oh, and then the spell was cast
And here we are in heaven
For you are mine
At last