She Sings From the Cave of the Heart: Abida Parveen 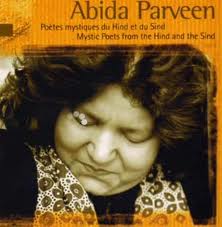 17 Dec She Sings From the Cave of the Heart: Abida Parveen

Enter the place but for a moment where this singer sings from if you desire to be truly moved.  It is evident that Abida Parveen has experienced the longing and love, the sorrow and bliss  of . . .Being.

Music that touches the individual soul reminds it of its Source and like the salmon fish, provokes it back upstream to its origin: called the Oversoul, the Beyond Soul, Paramatma.  Abida Parveen is a Sufi, so she sings of the mystery of the salmon. The individual soul must gain courage to swim through the rushing waters of illusion to a place beyond it, all the while celebrating and laughing at the many levels of illusion along its way, not condemning anything of creation because everything is a reflection of God, who is the ultimate goal. To have any other attitude would be to turn into stone. The Sufi vows to do the opposite: to have its heart and mind expanded—through love—to one day merge with Infinite Heart, Infinite Mind.

“The word Sufi is derived from Safa, meaning . . . purified of ignorance, superstition, dogmatism, egotism, and fanaticism, as well as free from limitations of caste, creed, race, and nation. The Sufis believe in God as the Absolute, the only Being; and that all creation is the manifestation of [that]nature. [brackets mine].

There have been Sufis at all periods of human history. Though they have lived in different parts of the world, speaking different languages and born into different faiths and beliefs, they have recognized and sympathized with each other, through the oneness of their understanding. Yet with their deep knowledge of the world and of spiritual mysteries, they have concealed their beliefs from the multitude, and have pursued in secret their way of attainment to the highest bliss.”

I think the above quote is the clearest and most universal meaning of “Sufi” I’ve as yet to come across. It is part of a message delivered in 1915 by the Universal Sufi and great saint, Hazrat Inayat Khan.

Wikipedia: Abida Parveen (born 1954) is a Pakistani singer of Sindhi descent and one of the foremost exponents of Sufi music. She sings mainly ghazals, Urdu love songs, and her forte, Kafis, a solo genre accompanied by percussion and harmonium, using a repertoire of songs by Sufi poets. Parveen sings in Urdu, Sindhi, Seraiki, Punjabi and Persian, and together with Nusrat Fateh Ali Khan is considered one of the finest Sufi vocalists of the modern era.

Abida Parveen was born in Pakistan. She received her musical training initially from her father, Ustad Ghulam Haider, and later from Ustad Salamat Ali Khan of the Sham Chorasia gharana. Growing up, she attended her father’s music school,where her foundation in music was laid. She embarked upon her professional career from Radio Pakistan, Hyderabad, in 1973. Her first hit was the song “Tuhinje zulfan jay band kamand widha”.

Abida performed on the internationally acclaimed Pakistani show Coke Studio, on which she sang three songs, including Ramooz-e-Ishq, Nigah-e-Darwaishaan, and Soz-e-Ishq.

Below I have chosen, her performance of “Nigah-e-Darwaishaan” for its particularly haunting quality, incorporation of modern instruments, and signature lyrics that are essential to all Sufi poetry: the language of the heart as it sings of its Ultimate Source and Ultimate Goal.

O God!
You are not found in the mosque
Nor in the temple
You are not in the holy scripture
Nor in prayers

God is not in the highest heaven nor in the temple, nor in the mosque

God is not in books about religion

I am crazed with passion for . . . Love
For the Heart-Possessor

Who is your dearest friend?
In one hand he holds the holy word
Around his neck he wears the holy thread

I am crazed with passion for . . . God
For the Heart-Possessor

But do not demolish anyone’s heart for God resides there

I am crazed with passion for . . . Love
For the Heart-Possessor

What was the capacity of the heart
Faced with sight of Beauty?
It was a mirror that was broken in the effort of watching over it.