She Brought Western Mysticism to the Modern World:Evelyn Underhill 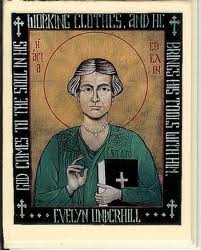 19 Jan She Brought Western Mysticism to the Modern World:Evelyn Underhill

Thomas Merton’s book Seven Story Mountain greatly influenced my decision to leave a successful career in music to become a Christian monk, launching my intense search for God through the contemplative life. However, during the first months of my own novitiate in a monastery in the northwoods of Minnesota in the 1970’s, I came across a book on the western mystics written by Evelyn Underhill, called The Essentials of Mysticism (1902).The teachings of Julian of Norwich, Meister Eckhart, John Tauler and others, spoke directly to my heart of truths my soul had but half-forgotten.

It is the mystic who not only asks, ” What is Reality?” but lives within this Question of questions in every facet of their life. Mysticism is the agreement between the self and the soul to put forth continual effort to cleanse the mind of its many inherited filters of convention, interpretation and judgment so that Reality can gradually shine through “as it is, infinite,” to use the words of the visionary poet, William Blake.

Underhill’s descriptions of the mystical path became for me —then— as important as the bible.  I learned that the path of union with God (or Reality) is an ongoing practice of learning the facts of being, how to become one with the Real through ever expanding states of integrative awareness. Like any genuine marriage, the mystical life is a work, a sacred work of stops and starts, successes and failures, that have little or nothing to do with dogmas, ceremonies, scripts, or contracts with the prevailing status quo.

The words of the mystics depicting the adventurous and risk-filled  journey of the inner life became a map of guidance for me that surpassed anything I would later learn through my studies in theology, philosophy, or psychology. I regarded Underhill and her “friends of God” as an invisible companion with whom I would spend many late night and early morning hours of reflection and meditation in my simple cell of wood and stone.

Evelyn Underhill (1875-1941) was born at Wolverhampton on December 6, 1875, the only child of (Sir) Arthur Underhill, barrister, and a bencher of Lincoln’s Inn. She was educated at home, save for three years at a private school in Folkestone, and later went to King’s College for Women, London, where she read history and botany. She also became a first-class bookbinder. From 1898 to 1913 she went abroad every spring and came to know and love the artistic treasures of France and Italy.

Evelyn Underhill began writing before she was sixteen and her first publication, A Bar-Lamb’s Ballad Book, of humorous verse concerned with the law, appeared in 1902. In 1907 she married Hubert Stuart Moore, a barrister, whom she had known since childhood. They had many interests in common in country lilfe and country lore, and in a love of cats. She shared her husband’s interest in wood and metal work and made many of the designs which he carried out.

The year of her marriage witnessed her final conversion to the Christian faith. But the outbreak of the modernist storm in the same year made it seem to her that the demands of Rome postulated a surrender of her intellectual honor. Through her first important book, Mysticism (1911), she made the acquaintance of Baron Friedrich von Hugel to whom “under God, ” she wrote, “I owe…my whole spiritual life.” Ten years later she formally put herself under his spiritual direction and she remained his pupil until his death in 1925.

From the time of her conversion Evelyn Underhill’s life consisted of various forms of religious work. She was fond of quoting St. Teresa’s saying that “to give Our Lord a perfect service Martha and Mary must combine.” Her mornings were given to writing and her afternoons to visiting the poor and to the direction of souls. As she grew older the work of direction increased until it finally became her chief interest. I

n 1924 she began to conduct retreats, and a number of her books consist of these conferences. Her other publications include three novels, two books of verse, a number of works on philosophy and religion, and various editions of, and critical essays on, mystics such as Ruysbroeck and Walter Hilton. She also wrote reviews and special articles for the Spectator (of which she was for some years the theological editor), and later for Time and Tide. In 1921 she gave the Upton lectures on religion at Manchester College, Oxford, later published under the title The Life of the Spirit and the Life of Today (1922). While working on Worship (1936), writtten for the Library of Constructive Theology, she became deeply interested in the Greek Orthodox Church and joined the Fellowship of St. Alban and St. Sergius.

During World War I (1914-1918) Evelyn Underhill worked at the Admiralty in the naval intelligence (Africa) department, but her views changed and in 1939 she found herself a Christian pacifist. She joined the Anglican Pacifist Fellowship and wrote for it an uncompromising pamphlet, The Church and War (1940).

In 1913 Evelyn Underhill became an honorary fellow of King’s College of Women and in 1927 fellow of King’s College; in 1939 she received the honorary degree of D.D. from the University of Aberdeen. She had a vivid, lively personality with a keen sense of humor and great lightness of touch. As befitted a good Incarnationalist she was interested in every side of life and had a passion for efficiency in everything she undertook. In her dealings with people, and especially with her pupils, she was always a little shy, having a great hatred, as she said, of “pushing souls about.” This love of souls coupled with the determination to help them to grow at God’s pace and not at their own or hers, won her the love and trust of all who went to her for help.

Evelyn Underhill died at Hampstead on June 15th, 1941. She had no children.

The audio-visual piece I’ve chosen below is a brief seven-minute excerpt from one of Evelyn Underhill’s works where in she describes a practical, “in the world” mystisicm.