Ravished by The Moon: Nick Drake 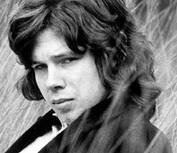 From somewhere outside of time his song streamed in for the world. “For the Morning” was used in an At&T commercial.

I like to think Nick was “telephoning” it in.

How did I miss this voice that sounded as tender as the transparent skin of peeled birch bark and as powerful as the whisper of God in the wilderness? Souls like these—that struggled so with time and institution and just fitting in—move me from such a deep place. Why? I think because these souls are the recipients of a particular kind of violence. This violence is exquisite because it’s origins have nothing to do with oppression, control,  domination, or the seeking of power for the ego’s sake. This violence is the violence of higher love. It picks only those souls through whom it can sing  its song of sorrowful joy and joyful sorrow.

I have picked below my favorite song of Nick Drake’s that just might be his most vulnerable and emotionally honest rendition of the human’s plight to search for that “place to be.”  Nick Drake was a real human being, not a human-doing. Higher Love searches for souls like these to sing its Song.

Wikipedia: Nicholas Rodney “Nick” Drake (1948 – 1974) was an English singer-songwriter and musician. Best known for the sombre pieces composed on his primary instrument, the guitar, Drake was also proficient at piano, clarinet and saxophone. Although he failed to find a wide audience during his lifetime, Drake’s work has gradually achieved wider notice and recognition; he now ranks among the most influential English singer-songwriters of the last 50 years.

Drake signed to Island Records when he was 20 years old and released his debut album, Five Leaves Left, in 1969. By 1972, he had recorded two more albums—Bryter Layter and Pink Moon. None of the albums sold more than 5,000 copies on their initial release. His reluctance to perform live or be interviewed further contributed to his lack of commercial success. Despite this, he was able to gather a loyal group of fans who would champion his music. One such person was his manager, Joe Boyd, who had a clause put into his own contract with Island Records that ensured Drake’s records would never go out of print. Drake suffered from depression and insomnia throughout his life, and these topics were often reflected in his lyrics. Upon completion of his third album, 1972’s Pink Moon, he withdrew from both live performance and recording, retreating to his parents’ home in rural Warwickshire. There is no known footage of the adult Drake; he was only captured in still photographs and in home footage from his childhood. On 25 November 1974, Drake died from an overdose of amitriptyline, a prescribed antidepressant; he was 26 years old.

When I was young, younger than before
I never saw the truth hanging from the door
And now I`m older see it face to face
And now I`m older gotta get up clean the place.
When I was green, greener than the hill
Where flowers grow and sun shines still
Now I`m darker than the deepest sea
Just hand me down, give me place to be.
When I was strong, strong in the sun
I thought I`d see when day was done
Now I`m weaker than the palest blue
Oh, so weak in this need for you.