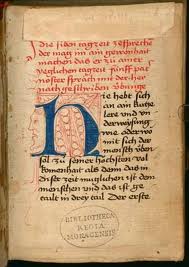 I recall reading his words by candlelight in a tent on a river bank in northern Germany, near the church where the 14th century Meister Eckhart preached his mystical sermons. It was the late winter of 1974, and a companion and I had mapped out a hitch hiking pilgrimage through Europe and North Africa.

Two years later I would enter a monastery in Minnesota, influenced by the illuminated teachings of this heretical monk, whose visions of union and identity with the Divine Source seemed to bridge all of the great religions like a string through beads.

Almost forty years have passed since those winter months on that river bank in Europe. And the words of Meister Eckhart ring as true for me now as they did then. His words of intimacy with God are still to me as fresh as the first fallen snow.

Meister Eckhart  (circa 1260 – 1327) was a German theologian, philosopher and mystic, born near Gotha, in the Landgraviate of Thuringia in the Holy Roman Empire. Meister is German for “Master”, referring to the academic title “Master Theologian” he obtained in Paris. Coming into prominence during the Avignon Papacy and a time of increased tensions between the Franciscans and Dominican Order of Friars Preachers, Eckhart was brought up on charges later in life before the local Franciscan-led Inquisition and he was eventually excommunicated from the Church. Tried as a heretic by Pope John XXII, his “Defence” is famous for his reasoned arguments to all challenged articles of his writing and his refutation of heretical intent. He purportedly died before his verdict was received, although no record of his death or burial site has ever been discovered.

He was well known for his work with pious lay groups such as the Friends of God. The central theme of Eckhart’s German sermons is the presence of God in the individual soul, and the dignity of the soul of the just man. Although he elaborated on this theme, he rarely departed from it. In one sermon, Eckhart gives the following summary of his message:

“When I preach, I usually speak of detachment and say that a man should be empty of self and all things; and secondly, that he should be reconstructed in the simple good that God is; and thirdly, that he should consider the great aristocracy which God has set up in the soul, such that by means of it man may wonderfully attain to God.” (from Sermons)

The 19th century philosopher Schopenhauer compared Eckhart’s views to the teachings of Indian, Christian and Islamic mystics and ascetics:

“If we turn from the forms, produced by external circumstances, and go to the root of things, we shall find that Sakyamuni and Meister Eckhart teach the same thing; only that the former dared to express his ideas plainly and positively, whereas Eckhart is obliged to clothe them in the garment of the Christian myth, and to adapt his expressions thereto.”
— Schopenhauer, The World as Will and Representation, Vol. II, Ch. XLVIII

“I say that God has begotten him [Christ] in my soul. Not only is the soul like him and he like it, but he is in it, for the Father begets his Son in the soul exactly as he does in eternity and not otherwise. . . The Father ceaselessly begets his Son and, what is more, he begets me not only as his Son but as himself and himself as myself, begetting me in his own nature, his own being. At that inmost Source, I spring from the Holy Spirit and there is one life, one being, one action. All God’s works are one and therefore He begets me as he does his Son and without distinction.” Meister Eckhart (Sermon 18)

aristocracy of the soul, individual soul, presence of God