Moods of the Soul Played By the Guitar: Ana Vidovic 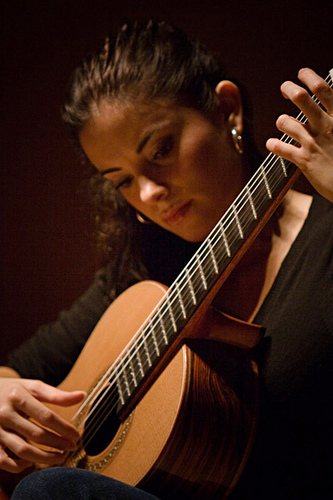 22 Dec Moods of the Soul Played By the Guitar: Ana Vidovic

A child prodigy, she started playing guitar at the age of five, inspired by her brother Viktor. By the age of 11 she was performing internationally, and at 13 became the youngest student to attend the prestigious National Musical Academy in Zagreb where she studied with Professor Istvan Romer.

Ana Vidović was born on 8 November 1980 in Karlovac, Croatia.

I am intrigued when I hear of a young child’s masterfulness on a musical instrument. Called my most a “prodigy,” I believe that a soul such as hers has come into the world with prior knowledge and experience. Not only prior skill as a musician, but previous memory of love, it’s beginning, rising, merging and ending . . . again and still . . . again.

There is something about a stringed instrument that most fittingly echoes the ancient and haunting experiences of the soul; especially, its lonesomeness for its origins, its recollections of love that spans centuries. The acoustic stringed instrument, whether it be the middle-eastern oud, the Indian sitar, the eight-stringed lute of the renaissance, or the spanish guitar, recalls the many sojourns of the human soul on this earth as well as its temporary visits to other realms in between lifetimes. Some of the most profound and sublime experiences of the soul cannot be expressed through words, but only through music. The renown Spaniard, Andres Segovia, once said that the guitar—in the hands of a master— was a full orchestra. Not only the heart, but many moods has the human soul. I wonder if the individual soul has a shape, that it resembles the curvature and rounded openness of the guitar.