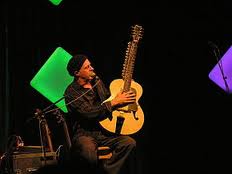 I was a “white soul” singer in New Orleans in the early 1960’s. That’s what they called light-skinned crooners like me who sang in funky horn bands that loved the music of Wilson Pickett, Sam & Dave, and Otis Redding. It wasn’t by choice but came naturally to me. I knew that was where the smiling pain and crying bliss lived. That was where the full range of emotions could be painted in the inner sky like a rainbow.So there I stood and there I shouted out the rhythm and blues.

Who would have thought that so many years later, on a pilgrimage to India, I would hear singers from every region of that eastern land sing cry their songs of longing to Love on string ,wind, and rhythm instruments that—although different in shape and tone from the guitar, drum, and horn—came from that same terrain of soul that is not surprised to find itself imprisoned in a body when it comes to earth.  So the only alternative to going mad is to turn the body itself into an instrument for the expression of its soul.

Since those early days of my formation as a singer in the southland, I’ve created my own version of east-west fusion and recorded a number of songs from the poetry of Hafiz and Rumi  to Rilke and William Blake. East-West fusion contains that special imprint of universality bridged by deep heart. So when I hear this familiar sound coming from another soul, I feel like I’ve been reunited with a long, lost relative with whom I hadn’t met for a long time, but realize we’ve lived on common ground. So, here is Harry Manx. I hope you give him a real and long listen.

Harry Manx is a musician who blends blues, folk music, and Hindustani classical music. He was born in the Isle of Man where he spent his childhood and now lives on Saltspring Island, British Columbia, Canada.

The Mohan veena is a stringed musical instrument used in Indian classical music. It derives its name from its inventor Pandit Vishwa Mohan Bhatt

The instrument is actually a modified Archtop guitar and consists of 20 strings viz. three melody strings, five drone strings strung to the peghead, and twelve sympathetic strings strung to the tuners mounted on the side of the neck. A gourd (or the tumba) is screwed into the back of the neck for improved sound quality and vibration. It is held in the lap like a slide guitar. The Mohan veena is under tremendous tension; the total strings pull to be in excess of 500 pounds.

Make the most of life, they say Cause life is short and slips away All around us the stars will burn And everyone in their turn

Out where dreams touch the sky In the morning they’re born, by evening they die

Don’t you want a place to lay your head Hold your hands with words instead Hardships felt and trouble discloses Tears fall silently . . .

Swift feet that fly to some You only dance when you’re sad Would that the world could know Yeah, you found some good in the bad

Besides some lovers that you know Evening tears, yeah you share the low

All around the stars will burn And everyone in their turn Hardships felt and trouble discloses Tears fall silently . . .Like dew on roses

What is this that I can’t see The cold mist is runnin’ all over me Stretch my eyes, wanna stretch my limbs Ain’t that the way that death begins

Oh child, Oh death, Death be easy now Pass me over another year

Oh child, Oh death, Death be easy Pass me over another year