He Painted the Earth’s Contours of the Soul: Nicholas Roerich 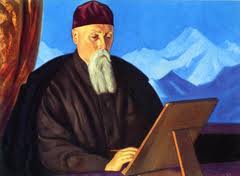 26 Jan He Painted the Earth’s Contours of the Soul: Nicholas Roerich

Being in the world (of illusion) but not of it, is the fate and destiny, lot and opportunity of the mystic. Some mystics (unconscious of their state) try their best to fit into the matrix of canned “reality” and can live lifetimes of profound sorrow and confusion. Others, however—like the mystic artist and scientist,Nicholas Roerich—are too busy living from a place of insight to be sad and disoriented for long.

Roerich traveled far and wide documenting  minute and grand traces of the divine, obvious and obscure treasures of the sacred. He was so curious to uncover the universal wisdom that lives and breathes in ancient books and sages, in plants and stones, that he became one of the most prolific artists ever to have traveled upon this rapturous and treacherous planet of ours.

The Russian painter was also very fortunate. Not only did Roerich meet Tolstoy and various other luminaries of his day,  he also had an auspicious encounter with “The Awakener” Meher Baba, shortly before Roerich’s death. Here is the quote below that appeared in the two volume opus written on Meher Baba’s counterpart, Mehera:

“Once when they went out for a ride, they saw Nicholas Roerich, a famous Russian painter, coming from the opposite direction. Roerich lived in Kulu with his son, Svetoslav, also an artist. Roerich, an elderly man with a long beard, looked up at Baba on the horse and tipped his hat. Baba nodded back. Baba didn’t mind the chance encounter,” said Mani, ” because Roerich didn’t know who Baba was.”  (In Mehera Meher Vol. 2 pg 310-311, 1946 Kulu valley.) My thanks to Ken Neunzig for locating this passage at the request of a mutual friend of ours, Tom Hickey.

(At the bottom of this page I have two brief videos for your enjoyment. The first meditational video incorporates the chant of Tibetan monks with a series of Roerich’s paintings. The second incorporates struck bells that  vibrate at different energy frequencies.)

Nicholas Roerich, also known as Nikolai Konstantinovich Rerikh  (1874 – 1947), was a Russian mystic, painter, philosopher, scientist, writer, traveler, and public figure. A prolific artist, he created thousands of paintings (many of them are exhibited in well-known museums of the world) and about 30 literary works. Roerich was an author and initiator of an international pact for the protection of artistic and academic institutions and historical sites (Roerich’s Pact) and a founder of an international movement for the defence of culture. Roerich earned several nominations for the Nobel Prize.

The Russian painter’s world recognition is confirmed by the fact that more than a hundred institutes, academies, scientific corporations, and cultural institutions worldwide have chosen him as their honorary and full member. In India itself, famous Indian philosophers, scientists, writers and public figures were personally acquainted with Nicholas Roerich.

A meeting with Leo Tolstoy determined the way of young Roerich. Leo Tolstoy said to him: “If you ever come upon a fast river on boat, drive upstream of that place where you need or the river will carry you away. But in the field of moral requirements . . . let the messenger [within you] keep the rudder very high so that you will sail!”.

In search of universal values Roerich studied  Eastern philosophy and works of outstanding Indian thinkers, such as Ramakrishna and Vivekananda, and the works of Rabindranath Tagore.

Acquaintance with the Oriental philosophic thought found reflection in Roerich’s creative work. While the core subjects of the artist’s earlier paintings were ancient pagan Russia . . .starting already from the middle of the 1905, many of his canvases and literary pieces were devoted to India (“Lakshmi”, “Indian path”, “Krishna”, Indian dreams” etc.). Roerich as painter and scientist was interested in the ancient cultures of Russia and India, as well as their common origin.  Roerich wrote “… when we call for study of the past, then will do it only for the sake of future. Let’s fashion the steps of the future from ancient wonderful stones”.

Roerich conducted archeological and ethnographical investigations in unexplored Asian areas. One of his itineraries ran through Sikkim, Kashmir, Ladakh, China (Sintzian), Russia (including Moscow), Siberia, Altai, Mongolia, Tibet, and unstudied areas of the Trans Himalayas. The expedition was continued from 1924 to 1928. Roerich’s expedition became a triumph of Russian studies in Central Asia. In terms of the uniqueness of his travels and the materials he collected during them, they can justly claim a special place among major expeditions of the 20th century.

In 1934–1935, Roerich conducted an expedition in Inner Mongolia, Manchuria and China, organized by US Department of Agriculture. The expedition’s purpose was to collect seeds of plants which prevent the destruction of benign layers of soil. These expeditions passed through a territory of Inner Mongolia located in northern and northeastern parts of modern-day China. Archeological studies were conducted, and antique manuscripts of great scientific importance were found.

In India Roerich continued to work at the “Himalayas” series which included more than two thousands paintings. Mountains were a source of inexhaustible inspiration for the painter. Art critics noted a new direction in Roerich’s creativity and called him “Master of mountains”. In India N. Roerich created the following series: “Shambala”, “Chingis-Khan”, “Kuluta”, “Kullu”, “Saint mountains”, “Tibet”, Ashrams” etc. Exhibitions were held in many Indian cities and attracted thousands of people.

Roerich always remained a patriot and a Russian citizen, only holding one passport – Russian. He never gave up the thought of coming back to his motherland. After the end of the war, the artist applied for a visa to enter the Soviet Union. But on December 13, 1947, he died, without knowing that he was denied the visa.

In Kullu valley, at the place of the funeral fire, a big rectangular stone was installed on which the following inscription was carved: “Here, on December 15, 1947, the body of Maharishi Nicholas Roerich – a great Russian friend of India – was committed to fire. Let there be peace”.