Early Pioneer on the Path of Existential Authenticity: Kate Chopin 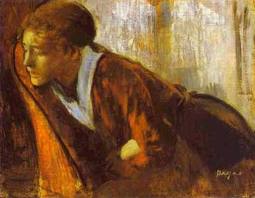 A thumbnail sketch of the old fight: men vs. women and the inevitable and necessary rise of feminism; the battle of the sexes.

But now . . . the new fight, which is actually the ancient and deeper battle: both men and woman must strive for authenticity beyond convention and its constraints to attain inner freedom. Men—as well as women—must forge their own way to embrace an individuality not defined by social expectations and norms.

Ralph Waldo Emerson—Chopin’s precursor and whom she read— saw the full person as one beyond gender, neither man nor woman, but a soul living in the world but not of it. He once wrote:

“Excite the soul, and the weather and the town and your condition in the world will all disappear; the world itself loses its solidity, nothing remains but the soul and the Divine Presence in which it lives.” (Journal, 1835)

“When the doctors came they said she had died of heart disease–of joy that kills.”

When the ill wife  learns that the news of her husband’s death is— in fact —false, the explosive tension between imagining a free life and the sure misery of returning to her conventional marriage, kills her. Perhaps it is also the illumination that a free death is preferable to an imprisoned life that fills her with so much ecstasy that it takes her from her body.The doctors arriving late on the scene surmise that the wife has died from sheer  joy of finding out that her husband is really alive.

The physicians arriving at the end of the tale represent the societal myth that a conventional, prescribed, soul-shrinking marriage is preferable to death. If one but glimpses the shape and power of the soul who—but for a moment— has stepped out of the world of fashion and roles and expectations, they will find that the doctors are mistaken. They have misdiagnosed the true cause of a being’s ultimate joy.

I have below a Youtube of the short story that is amazingly brief but powerful. Here are a few quotes in print from The Story of an Hour(1894) to hopefully whet your appetite–

“There was something coming to her and she was waiting for it, fearfully. What was it? She did not know; it was too subtle and elusive to name. But she felt it, creeping out of the sky, reaching toward her through the sounds, the scents, the color that filled the air.”

“She said it over and over under her breath: ‘free, free, free!’ The vacant stare and the look of terror that had followed it went from her eyes. They stayed keen and bright. Her pulses beat fast, and the coursing blood warmed and relaxed every inch of her body.”

“She saw beyond that bitter moment[the thought of her husband’s funeral] a long procession of years to come that would belong to her absolutely. And she opened and spread her arms out to them in welcome.” [bracket’s mine]

“There would be no powerful will bending hers in that blind persistence with which men and women believe they have a right to impose a private will upon a fellow-creature.”

Wikipedia excerpt: Kate Chopin, born Katherine O’Flaherty ( 1850 –1904), was an American author of short stories and novels. She is now considered by some to have been a forerunner of individualist authors of the 20th century. (italics mine)

In 1899, her second novel, The Awakening, was published, and the book was criticized because of its moral as well as its literary standards. This, her best-known work, is the story of a woman trapped in the confines of an oppressive society. Out of print for several decades, it is now widely available and critically acclaimed for its writing quality and importance as an early individualist work. (italics mine)

Some of her writings, such as The Awakening, were too far ahead of their time and therefore not socially embraced. After almost 12 years in the public eye of the literary world and shattered by the lack of acceptance, Chopin was a virtually nonexistent author.

There is no question regarding where Kate Chopin’s sympathies lay: with the individual in the context of his and her personal life and society.

From The Awakening: “Even as a child she had lived her own small life all within herself. At a very early period she had apprehended instinctively the dual life—that outward existence which conforms, the inner life which questions.”

Below is a reading of Kate Chopin’s The Story of an Hour.