A Westerner Returned to the Center: Bede Griffiths 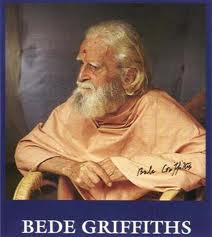 22 Jan A Westerner Returned to the Center: Bede Griffiths

My early influences during my first years as a monk were Thomas Merton, Evelyn Underhill, and the most dear to me, Bede Griffiths. The first book that I had read from this English Benedictine who’d become a renunciate in India in the 1950’s was Return to the Center(1976). I was astounded at the pure love and humility that emitted from its pages. A spiritual cocktail—an unlikely mixture of profound emotion and egolessness— can produce a great power, an energy whose source resides in the innermost cavern of the heart. This kind of love extends outward to the world with such immense force that its effects are likely to be greater than any religious, political, ideological, philosophical, or artistic movement in any period of history. Father Bede said it this way:  “Stillness within one individual can affect society beyond measure.”

In a brief but profound interview before his death (see the youtube below) Father Bede said: “I’m being overwhelmed with love. I don’t know whether or not I can survive it . . . a real death of the mind . . .  when everything else goes you discover this love that is in you all the time . . . but you know nothing about it.”

“I was no longer the centre of my life and therefore I could see God in everything.”

“I think the Mother is gradually revealing itself to me and taking over. But it is not the Mother alone. It is the Mother and the Father, the male and the female, sort of gradually having their marriage.”

“Obedience is detachment from the self. This is the most radical detachment of all. But what is the self? The self is the principle of reason and responsibility in us. It is the root of freedom, it is what makes us [human beings].” Brackets mine.

“You must be ready to give up everything, not only material attachments but also human attachments . . .But the one thing which you have to abandon unconditionally is your self.”

“Above all we have to go beyond words and images and concepts. No imaginative vision or conceptual framework is adequate to the great reality.”

Bede Griffiths OSB Cam (1906 – 1993), born Alan Richard Griffiths and also known, by the end of his life, as Swami Dayananda (“bliss of compassion”), was a British-born Indian Benedictine monk who lived in ashrams in South India and became a noted yogi. He has become a leading thinker in the development of the dialogue between Christianity and Hinduism. Griffiths was a part of the Christian Ashram Movement.

In 1955, he embarked for India. At the time, he wrote to a friend: “I am going to discover the other half of my soul.”
Griffiths joined with a Belgian monk, Father Francis Acharya OCSO. They sought to develop a form of monastic life based in the Indian tradition, adopting the saffron garments of an Indian sannyasi (an ascetic or monk). At that point, Griffiths took the Sanskrit name “Dayananda” (“bliss of compassion”). During that time he continued his studies in the religions and cultures of India, writing Christ in India while there. He also visited the United States during the period, giving a number of talks about East-West dialogue and was also interviewed by CBS television.

Later, in 1968, he moved to Shantivanam (“Forest of Peace”) ashram in Tamil Nadu, which had been founded in 1950 by the French Benedictine monk Abhishiktananda (Dom Henri Le Saux OSB), from the Abbey of Kergonan, along with another Frenchman, the Abbé Jules Monchanin. The two had developed a religious lifestyle which was completely expressed in authentic Indian fashion, using English, Sanskrit and Tamil in their religious services. They had built the ashram buildings by hand, in the style of the poor of the country. Monchanin had died in 1957, though, and Le Saux wanted to devote himself to a hermit’s life. Griffiths came with two other monks to assume life there and to allow Le Saux his wish.

Griffiths resumed his studies of Indian thought, trying to relate it to Christian theology. At this point, he became known as “Swami Dayananda” (“bliss of compassion”). He wrote 12 books on Hindu-Christian dialogue. During this period, Griffiths desired to reconnect himself with the Benedictine Order and sought a monastic congregation which would accept him in the way of life he had developed over the decades. He was welcomed by the Camaldolese monks and he and the ashram became a part of their congregation.

‘Going native’ created tensions with the Catholic hierarchy as did Bede Griffiths’ remarkably progressive views. These included believing that homosexual love was “as normal and natural as love betwen people of the opposite sex”. He advocated inter-faith communities and wanted a Church that was more concerned with love than sin. He realised that God was feminine as well as masculine and was one of the first advocates of married clergy and ministries for women. Like that other great Catholic mystic Thomas Merton who also travelled to the East, Griffiths believed that meditation should take a central place in worship.

Griffiths was a proponent of integral thought, which attempts to harmonise scientific and spiritual world views. In a 1983 interview he stated, “We’re now being challenged to create a theology which would use the findings of modern science and eastern mysticism which, as you know, coincide so much, and to evolve from that a new theology which would be much more adequate.”