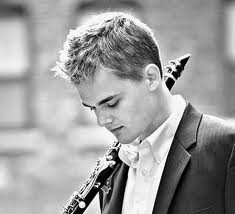 Shankar’s collaboration with sublime eastern vocalists creates such space and presence between instruments you’d think a planet has passed between every one of them without even grazing a note. To tell you the truth, this makes me a bit envious I started so late. I would have hung it up already if I hadn’t been so damn thunderstruck with the whole business of fusion more than a decade ago when I accidentally on purpose fell into the gap beyond time on a pilgrimage to India. Never been able to find my way back again. Nor do I care to.

Much of what we term “fusion” is crammed with cute contrivance and populated by superficial dj disco. World music it’s called. Good luck with finding the good stuff, the real deal. But it’s there. And Tucker has his pulse on it.

I have a feeling there’s been another acceleration afoot with our two major cultural groups in the good ol’ USA. You have “the polarized.” We all know the various factions these two extremes represent.  Left, right, fundamentalists, governmentalists (my word). This is the majority of the population here stateside. The law of karma hard at work: action and reaction and much of it is negative. The shadow of the law of rhythm.

Then you have those who are becoming “fused”  by some grander scheme of the universe.  This group is difficult to categorize because they just refuse to take sides. They ain’t left and they ain’t right. In fact they are not on a “line” or a “side” at all. They are so busy with the creative play of integrating the opposites (what Alfred North Whitehead called “major beauty”) they don’t really have time to gripe and complain. They don’t get on some soap box of entitlement  or  infringement. Now I’m not saying these dreamers I’m talking about don’t have their moments when they try to fit in the dueling matrixes of earth. They can get caught up in the good guy-bad guy opposition for a spell. They can do the dance of war for a while. But deep down they know they are just not that good at it, so should leave it to those who are.

The universal law of rhythm in one of its most creative forms seems to be deep at work in their souls, the ebb and flow of life —and beyond it— to a realm that has its own ebb and flow, breathing in and breathing out, until a soul is compelled to make its return to this sad, mad and glad earth for another spin. Sure am happy Tucker did, even though I have to admit I’m a little jealous of that Beauty, that wonderful heaven of sound, that sound of a higher heaven he creates.

Shankar Tucker is an American clarinetist and music composer. He rose to fame with the popularity of his online music series called “The ShrutiBox”. The Shrutibox, features his fusion compositions and was released online on media sharing platforms like Youtube and Soundcloud. He is the music director for an upcoming Tamil film.Tucker also played recently for composer Pritam in the movie Mausam.

Shankar grew up in Massachusetts. He was named Shankar as suggested by Amritanandamayi whom his family follows. As a high school student, Shankar was drawn towards Indian classical music on listening to “Remember Shakti” by John McLaughlin and started playing on his own. Shankar graduated from New England Conservatory in Boston, where he studied orchestral clarinet performance. He started taking lessons in Indian classical music from Peter Row, a sitar player. Eventually he obtained The Frank Huntington Beebe Fund to study music under flute maestro Hariprasad Chaurasia in Mumbai in 2010. Apart from clarinet Shankar knows how to play tabla, kanjira, piano, bass and guitar.

(This interpretation of the classic ghazal [Persian spiritual poetry] features Rohini Ravada on vocals and Shankar Tucker on keyboards, clarinet, and tabla. )

(This song features Rohini Ravada on vocals. All other instruments were performed and recorded by Shankar Tucker. This song was originally composed by Shankar Ehsaan Loy for the movie Luck by Chance.)